Falcon 8X rolled out in in Mérignac

Home/Aircraft, Private Jet Charter/Falcon 8X rolled out in in Mérignac

Falcon 8X rolled out in in Mérignac

Falcon 8X Roll-Out in in Mérignac

Christmas came early this year when Dassault Aviation rolled out the Falcon 8X yesterday at Aéroport de Bordeaux-Mérignac (BOD) in Mérignac, France. The aircraft has been sufficiently ground tested and was ready to be unveiled in all of it’s glory. In the first quarter of 2015, the Falcon 8X should make its maiden flight, meaning the Falcon 8X will be joining the Dassault Falcon family very soon. The Falcon 8X is based off of the already successful falcon 7X, which is a large cabin aircraft capable of nearly 6,000 nautical mile range at a decent speed. The Falcon 8X offers a slightly longer cabin as well as new engine upgrades and an extended range brought about by aerodynamic modifications and a larger fuel capacity. The Falcon 8X also takes other attributes from the Falcon 7X, it is capable of much shorter takeoffs than jets of its size, and is of course very fuel efficient for a large cabin jet. 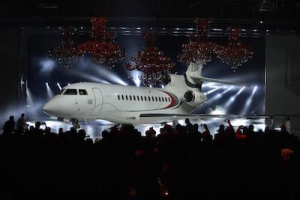 The Falcon 8X offers 3 Pratt & Whitney Canada turbofan engines that deliver more thrust but also lower fuel consumption, these engines allow the Falcon 8X to take off in under 4,000 ft (which is a figure seen by light jets and other small aircraft). Along with takeoff requirement improvements, the Falcon 8X is capable of flying a maximum of mach .90 and a range of 6,450 nautical miles (albeit at a lower speed of mach .80). Internal space is refined as compared to the Falcon 7X, the cabin is now 42.67 ft excluding the cockpit and designated baggage area we have come to love by Dassault. The cabin is 6.17 ft high and 7.67 ft wide, making for a cabin high enough for even the taller passengers to stand comfortably as well as enough cabin width for a bedroom suite.

Cabin features look spectacular with a cabin pressurized to 3,900 ft, whereas most jets generally have a cabin pressure of 6,000 to 8,000 ft, not only is the cabin pressure more comfortable, but the air circulation is done so incredibly fast, all of the air in the cabin gets completely replaced in mere minutes. Cabin dampening has dropped the cabin noise level to 52 dB, lower than a normal conversation (60 dB) and almost as quiet as a whisper. Perfect for the the FalconCabin HD+ cabin management system, which makes it possible to stream music and video straight from your iPhone or iPad, as well as control the lighting and entertainment options right from your device. All of these features is addition to an incredibly well lit cabin with to 33 windows make the cabin of the Falcon 8X a remarkable sight.

The Falcon 8X will be capable of carrying 19 passengers, but standard configurations are likely to be in the 12-16 passenger range, with options of bedroom suites, full sized showers, galley and lavatories. Expected to cost approximately $57 million and be released to the public in 2016, this jet poses a credible threat to other long ranged large cabin jets such as the all new Gulfstream G600, and the newer Bombardier Global Series.