Both aircraft can be configured for up to 19 passengers, the G600 offering 4 living areas, and 3 living areas on the G500, this paired alongside both forward and aft full sized lavatories or galleys. 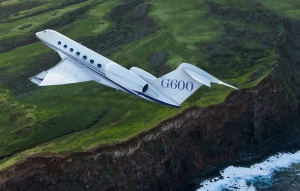 The Gulfstream G500 and G600 are new additions to the Gulfstream’s fleet, but won’t replace the G450 and G550. Both are designed to be a near brother of the already superb G650, offering the same passenger capacity, the same full three-axis digital fly-by-wire system, and the same signature oval windows, the largest of any business jet.
“The active control sidesticks enable both pilots to be consistently on the same page, enhancing safety, no other business aircraft on the market has this feature.” (Dan Nale, Senior VP of Engineering Programs and Test.) This is a large step in the right direction with 10 full panel touchscreens just for the pilots cabin, third-generation Gulfstream EVS and Gulfstreams own HUD2.

No real word mockups of the cabin have been shown to the public, but the design most defiantly will be near identical to the industry leading G650. With immense range, the best in comfort, these jets will offer the features of the G650, while maintaining a lower price tag. Projected price for the G500 is $45.5 million while the G600 will sell for $54.5 million, a much more cost effective solution than the G650 with a current value of over $72 million.

What does this mean for the G650? Surprisingly, not much. The G650 will still have the greatest range of any of current production large business jet. Taking technologies from the G650 to create these aircraft means that these aircraft are essentially a second revision of the G650, albeit with a smaller cabin and shorter range. The customers interested in the G650’s range will still have no better alternative, even with the upcoming bombardier Global 7000 and 8000, very few aircraft can give the G650 a run for its money concerning speed and range.

But who is this aircraft for? The G500 and G600 will be for customers seeking the speed and comfort of a G650, but don’t necessarily require the range. The ability to offer a 19 passenger capacity aircraft that travels at Mach .90 is something we never expected from Gulfstream this early down the line. For private owners are charter operators alike, these business jets are carrying more passengers at a faster speed, with better efficiency and comfort. What’s not to like?