Bombardier’s Global 7500 has entered the Indonesian market with the first delivery of one of the company’s flagship business jets to an undisclosed customer based in Jakarta. The worldwide Global 7500 fleet now exceeds more than 50 aircraft, a milestone reached in March, about 2.5 years after the model entered service in late 2018.

Indonesia marks the latest Asia-Pacific region expansion for the Global 7500, an aircraft model that is also based in Japan, Australia, Taiwan, and Malaysia. Bombardier noted that its entire portfolio is generating strong interest in the region.

Calling the 7500 aircraft “ideally suited to customers in the Asia-Pacific region who are looking to connect far-flung city pairs,” Nilesh Pattanayak, Bombardier regional v-p of sales for Asia-Pacific, said, “The ultra-long-range Global 7500 aircraft opens up a world of possibilities for convenient and productive travel.” 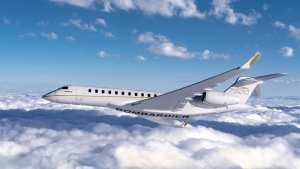 With a 7,700-nm range, the Global 7500 can fly nonstop from Jakarta, Indonesia, to Seattle, from Singapore to San Francisco, from Tokyo to New York, and from Melbourne, Australia, to Los Angeles, Bombardier said.

As its presence expands in Asia-Pacific, Bombardier has been growing its customer-service footprint in the region with a new customer-service center expected to open in 2022 at Essendon Fields Airport in Melbourne, Australia, alongside the ongoing project at its Singapore service center, which will quadruple the operation’s space there.

The Bombardier Global 7500 is the industry’s only business jet with four living spaces for customers to enjoy on journeys up to a range of 7,770 nm. That kind of performance allows nonstop flights from cities like New York to Hong Kong. The Global 7500 recently flew 8,152 nm from Singapore to Tuscon, Arizona and the aircraft landed with fuel reserves for nearly 1.5 hours of additional flight. Takeoff distance for the Global 7500 is now at 5,800 ft at full fuel in standard operating conditions, compared to an expected 5,950 ft. Its landing distance has also improved to 2,850 ft. from an expected 2,975 ft., rivaling that of aircraft in the light jet category.

The first zone is equipped with four of Bombardier’s newly designed Nuage seats, and two deployable side tables. Next is the conference suite, offering seating for six and a dining table that can be set up to span the width of the cabin. In the entertainment suite, passengers can kick back and watch a movie in an atmosphere that feels as cozy as a living room. Finally, the aftmost suite offers a dedicated bed, work area, and en suite lavatory with an optional shower. There’s also a wardrobe and unrestricted access to the baggage compartment.