The Citation X+ is a Mid Sized Jet produced by Cessna. The Citation X+ is a very unique aircraft when considering the cruise speed and top speed of such an aircraft. The Citation X+ allows you to fly at mach .935 or 711 miles per hour, making this aircraft the fastest operating business jet ever made. The X+ is based off of the Citation X which was first developed in 1996. Changes from its predecessor include a 14.9 in longer cabin, 0.8 in of extra height, a 5.6 ft increase in wingspan, an increase in maximum takeoff weight to 36,600 lb and a 26 nautical mile increase in range up to 3,242 nautical miles. The original Citation X was a very similar aircraft, lacking winglets on the wingtips and not as easily distinguishable from the X+ as you may imagine. The X+ has 2 Rolls-Royce AE3007C2 turbofan engines capable of pushing 7,034 lbs of thrust (quite a feat considering the engine size) Able to takeoff in 5,250 feet, this is a pretty large runway requirement when compared to smaller business jets, but just about right for a jet like the X+. What the X+ lacks in takeoff distance, it easily makes up for in climb rate. The X+ climbs at 4,117 feet per minute (one of the fastest climb rates we’ve seen in an aircraft of this type). 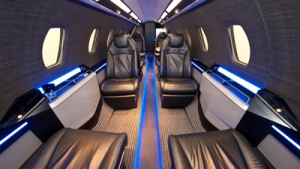 The all new cabin design offers expanded legroom and allows the Citation X+ to reach new levels of comfort, the X+ has a partial galley and a full sized lavatory, something unexpected from a Citation aircraft, the X+ is one of the largest cabin aircraft made by Cessna thus far and offers great in-cabin features such as the Clairity system; an intelligent cabin management and entertainment solution that is integrated with the aircraft’s avionics and electrical systems. Clairity gives passengers most cabin controls, data and media sharing and connectivity to other passengers. Through the Clairity touch screen system passengers have control of cabin lighting, window shades, temperature control and entertainment at their fingertips, this coupled with Wi-Fi connectivity make this aircraft a sufficiently modern and technologically strong aircraft.

The Citation X+ is one of the fastest ways to travel, no current production business jet has reached this speed. When traveling with the X+, you know for a fact that you will arrive first. In a world of constant pressure, where getting to your destination is the most important factor, the Citation X+ shines as the best option for private air travel quickly. Not only is the X+ fast, but it is a very comfortable Mid Sized Jet, and seats up to 12 passengers comfortably in a beautiful cabin. The X+ is a marvel of technology and comfort, and for that reason, this week’s Aircraft of the Week!