Bombardier has flown the Global 7000 prototype at speeds up to Mach 0.995 five months after launching the flight test programme, the company says on 29 March.

In becoming the largest business jet to come within five-thousandths of a Mach number below supersonic speed, the achievement shows the Global 7000 flight envelope is expanding.

The Global 7000, powered by two GE Aviation Passport engines, will enter service in 2018 with a maximum operating speed of Mach 0.925, but the jet is flown beyond that limit in flight tests. 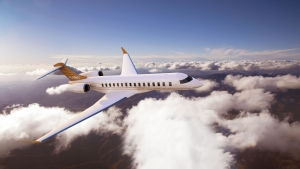 Since first flight, Bombardier has racked up 200 hours in the flight test campaign with two prototypes —FTV1 and FTV2.

“Our flight test vehicles continue to show a high degree of maturity in testing, dispatching twice daily in many cases,” says Michel Ouellette, senior vice-president for the Global 7000 and Global 8000 programmes.

The first two prototypes feature the Global 7000’s fly-by-wire system and engine, but rely on a pre-production version of the wings. Bombardier announced in July 2015 a wing redesign that caused the programme to delay entry into service by two years.

In February, chief executive Alain Bellemare revealed the redesign reduced the weight of the wing, but the aerodynamics of the airfoils remain unchanged. The first flight of a prototype Global 7000 with the lighter-weight wing installed is expected this summer.