We get calls every day from people asking if we offer “shared rides” on private jets. Callers are generally not thrilled when we explain to them that we don’t.

What you should know however is why we don’t offer Sharing a Private Jet rides, and that the concept of a shared private jet flight isn’t something you should rely on as a means of reducing the cost of your next private jet adventure. It will just be a waste of your valuable time.

In the private jet business, Sharing a Private Jet and it is difficult to generate buzz. We’re a niche industry that caters to a niche clientele. The media eats up press releases that offer Sharing a Private Jet products at mass-market prices, however. After all, who wouldn’t be enticed by the possibility off flying on a private jet for less than the cost of a commercial airline ticket? This is the reason you read so much about Sharing a Private Jets… because the media eats up the notion. This is also the reason some companies try to do it, because it is an easy way to get a lot of calls, very quickly and inexpensively; relatively speaking of course.

Unfortunately what we end up with as a result is buzz about a product that the marketplace just can’t deliver, and a lot of wasted time because of it. Here are the main reasons why per-seat private jet charters just don’t work:

There is such a strong alternative to per-seat private jet flights, with consistently low prices, a route network that is unbeatable, and a schedule frequency that is second to none…Commercial aviation! Yes, flying private has so many benefits to commercial aviation and is an invaluable travel tool, however not when all you’re looking for is one seat at a cheap rate.

Aircraft owners, and those who pay enough for a charter to justify the operating costs of the airplane spend the extra money for private planes for several reasons including privacy, Sharing a Private Jet and the notion of setting their own schedule and departing on their own time. These people for the most part are not interested in a little bit of money to take a stranger on their flights. There really is just no real inventory out there to justify these “shared ride” flights. To offer a plane cheap on a per-seat basis, there has to be someone else picking up the major tab of the aircraft’s operating costs, and that is nearly impossible to find. 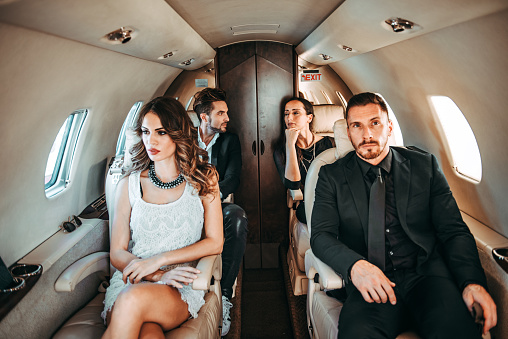 LEGAL? ILLEGAL? when it comes to Sharing a Private Jet

Putting everything else aside, the notion of selling an individual seat on a private jet isn’t even a legal practice. Air charters are governed by the rules of FAR part 135, which are the rules and regulations for on-demand air carriers. It is illegal to sell individual seats on part 135 flights, which all private jet charters are. In order to sell individual seats, you need a part 121 operating certificate, which is the type of operating certificate that commercial airlines have.

Companies are attempting to sell individual seats on private jet charter flights through a loophole. The only companies you’ll see attempting to sell individual seats on planes are brokerage companies that do not hold any sort of FAA operating certificate. Sharing a Private Jet by said companies are chartering the entire aircraft themselves from the part 135 operator, and then attempting to sell the seats individually. For the time being, they’re getting away Sharing a Private Jet  because the flight is still being booked as an on-demand charter through the part 135 carrier. This is a loophole that I don’t expect to last.

Those who attempt to sell individual seats by Sharing a Private Jet look to the same aircraft we utilize for their shares. In order to make the model work, they

We speak with our aircraft owners about these sharing a Private Jet or  per-seat businesses all the time, and are told stories of literally being begged for empty-leg prices when empty legs aren’t available, because otherwise these passengers who booked a seat already will not be able to be given a ride altogether.

To make a long story short, as interesting as the concept sounds, it isn’t a viable business model. What you’ll find when looking for a per-seat shared ride on a private jet is that you just won’t get what you’re looking for 9 times out of 10 +, and that is simply because the market just doesn’t support it.