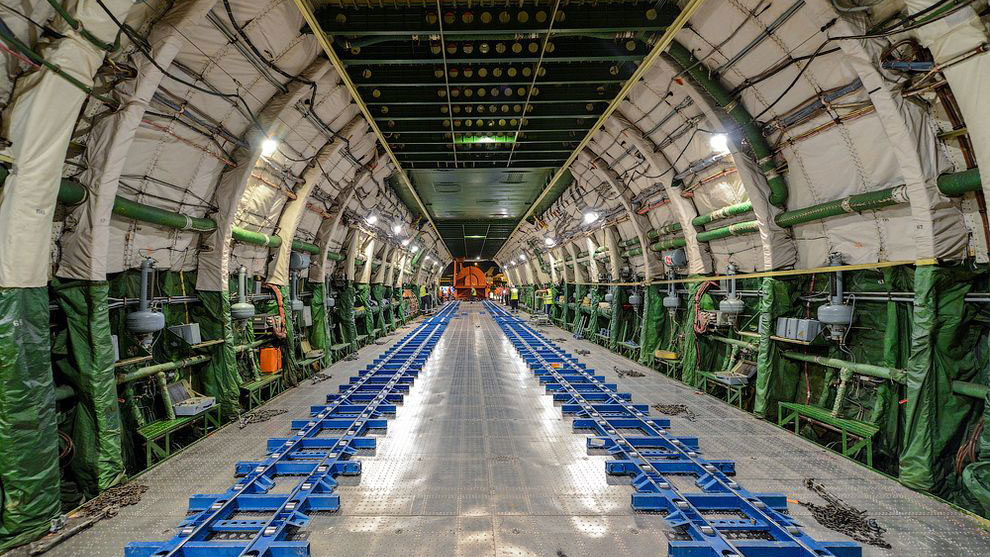 Shipping PPE from China, Malaysia, India and Vietnam to the US and South America at the best prices.

The Antonov AN-225 is the largest aircraft in the world and is the only aircraft that features six turbofan engines. It has the capability to transport up to 250 tonnes of cargo, including single pieces weighing up to 200 tonnes over short and medium haul routes. ‘Mriya’ – meaning ‘Dream’ in Ukrainian – entered commercial service in 2001. Originally developed to transport the Energiya carrier-rocket and Buran space shuttle, it has since garnered 242 world records across a 30-year period.

Since its maiden flight on December 21, 1988, the Antonov AN-225  has delivered heavy and outsize shipments across the globe. It is scheduled to remain in service until at least 2033.

The Antonov AN-225 as satellite launcher

The largest cargo plane in the world is now back in the space game – helping China to launch its satellites. The Aerospace Industry Corporation of China (AICC) has just inked a deal with Antonov that will see the design and development of a new type of AN-225 that will have heavier lifting capabilities. The Chinese plan to use the Antonov AN-225 to carry satellites (on its back) and launch from seven miles (12,000m) into space. The satellite launch industry is worth more than $200 billion, a space race the Chinese are keen to profit from.

The Antonov An-225 Mriya (Ukrainian: Антонов Ан-225 Мрія, lit. ‘dream’ or ‘inspiration’; NATO reporting name: Cossack) is a strategic airlift cargo aircraft that was designed by the Antonov Design Bureau in the Ukrainian SSR within the Soviet Union during the 1980s. It is powered by six turbofan engines and is the heaviest aircraft ever built, with a maximum takeoff weight of 640 tonnes (710 short tons; 630 long tons). It also has the largest wingspan of any aircraft in operational service. The single example built has the Ukrainian civil registration UR-82060. A second airframe with a slightly different configuration was partially built. Its construction was halted in 1994 because of lack of funding and interest, but revived briefly in 2009, bringing it to 60–70% completion. On 30 August 2016, Antonov agreed to complete the second airframe for Airspace Industry Corporation of China (not to be confused with the Aviation Industry Corporation of China) as a prelude to commencing series production.

The Antonov An-225 was an enlargement of the successful Antonov An-124 that was initially developed for transporting the Buran spaceplane. The only Antonov AN-225 airplane was completed in 1988. After successfully fulfilling its Soviet military missions, it was mothballed for eight years. It was then refurbished and re-introduced, and is in commercial operation with Antonov Airlines carrying oversized payloads.The airlifter holds the absolute world records for an airlifted single-item payload of 189,980 kilograms (418,830 pounds), and an airlifted total payload of 253,820 kg (559,580 lb).It has also transported a payload of 247,000 kg (545,000 lb) on a commercial flight.

Development of the Antonov AN-225

The Antonov An-225 was designed to airlift the Energia rocket’s boosters and the Buran orbiter for the Soviet space program. It was developed as a replacement for the Myasishchev VM-T. The Antonov AN-225 ‘s original mission and objectives are almost identical to that of the United States’ Shuttle Carrier Aircraft.

The second Antonov AN-225  was partially built during the late 1980s for the Soviet space program. Following the collapse of the Soviet Union in 1991 and the cancellation of the Buran space program, the lone operational An-225 was placed in storage in 1994. The six Ivchenko-Progress engines were removed for use on An-124s, and the second uncompleted the Antonov AN-225 airframe was also stored. When it became clear that a cargoliner bigger than the An-124 was needed, the first An-225 was re-engined and put back into service.

By 2000, the need for additional the Antonov AN-225 capacity had become apparent, so the decision was made in September 2006 to complete the second An-225. The second airframe was scheduled for completion around 2008, then delayed. By August 2009, the aircraft had not been completed and work had been abandoned. In May 2011, the Antonov CEO is reported to have said that the completion of a second An-225 Mriya transport aircraft with a carrying capacity of 250 tons requires at least $300 million, but if the financing is provided, its completion could be achieved in three years. According to different sources, the second aircraft is 60–70% complete.

Airspace Industry Corporation of China (AICC)’s president, Zhang You-Sheng, told a BBC reporter that AICC first contemplated cooperation with Antonov in 2009 and contacted them in 2011. AICC intends to modernize the second unfinished Antonov AN-225 and develop it into an air launch to orbit platform for commercial satellites at altitudes up to 12,000 m (39,000 ft).

In April 2013, the Russian government announced plans to revive Soviet-era air launch projects that would use a purpose-built modification to the Antonov AN-225 as a midair launchpad.

In August 2016, representatives from Ukraine’s Antonov and AICC, an import-export company operating out of Hong Kong, signed an agreement to recommence production of the Antonov AN-225 , with China now planning to procure and fly the first model by 2019. The aviation media cast doubt on the production restart, indicating that due to the ongoing Russia–Ukraine conflict needed parts from Russia are unavailable, although they may be made in China instead.

On 25 March 2020, the freighter commenced a series of test flights from Hostomel Airport near Kiev, after more than a year out of service for the installation of a domestically-designed power management and control system.

GET A CARGO AIR CHARTER QUOTE