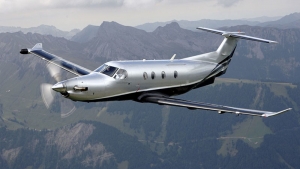 Delivery of 91 PC-12 NG single engine turboprops in 2016 make it officially the top-selling turbine-powered business aircraft in the world. With 91 aircraft delivered to customers around the world in 2016, the PC-12 NG outpaced sales of all other individual models of turbine-powered business aircraft. In mid-2017, Pilatus will deliver the 1,500th PC-12.

At this year’s “Annual Industry Review” press conference, the General Aviation Manufacturers Association GAMA released its 2016 Year-End Aircraft Shipment and Billings report to the public. While overall industry shipments of turboprops and business jets declined by 3% relative to 2015, Pilatus increased sales of its popular single-engine PC-12 NG turboprop by 30%.

New features in the 2016 PC-12 NG increased cruise speed to 285 KTAS (528 km/h), reduced cabin noise levels, offered updated interior design options, and featured more than a dozen drag reduction changes to the airframe, increasing both range and speed. These enhancements were well received in the market, with demand high across the global Pilatus sales network.

In mid-2016, Pilatus was also recognized for its customer service being rated number 1 for the 15th consecutive year by owners and operators in an annual survey conducted by Professional Pilot magazine.

“The entire Pilatus team, from engineering to manufacturing to sales and service worked hard this year to achieve these successes in a very challenging market. The PC-12’s comfort, versatility, performance, resale value, and safety all come together to make it the most sought after aircraft in the market. We are honored that our customers continue to put their trust in us, and we will never take that for granted.”

Despite an industry trend toward lower used aircraft valuations, the pre-owned PC-12 market continues to remain very strong. According to JetNet Evolution Marketplace Market Summary data for January 2017, just 3.7% of the global fleet of PC-12s was listed for sale. The Spring 2017 Vol 17-01 edition of Aircraft Bluebook indicates that a ten-year-old 2007 model PC-12 is still valued at 81% of its original Factory New Average Equipped List Price. A study conducted by Rolland Vincent Associates, LLC in December, 2016 determined that the 10-year average annual depreciation rate for a Pilatus PC-12 was only 2.2% – far lower than any other category of business jet or turboprop.

Click here to get more information about the PC-12.