Originally based off of the falcon 50, the 900 shares many features with the Falcon 50, notably trijet engines and long range capability. Trijet engines were developed in 1950 and gained popularity in the 1980s when twin jet aircraft were limited to flying within 60 minutes of an airport in case of engine failure. These new trijet aircraft allowed new levels of freedom with an additional engine for performance and safety purposes. 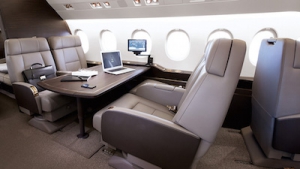 The Falcon 900LX, the most recent and available private jet fits comfortably into the large jet category. With an aircraft length of 66.31 ft, the 900LX may be shorter than modern day competing aircraft, leaving a mere 33.2 feet of cabin length. Larger super heavy aircraft such as the Gulfstream G500 boasts a 50.1 ft cabin length, but compared to other large jets in it’s category such as the Challenger 604 (28.3 ft) the Falcon 900 shines. Cabin size is roomy with a 6’ 2 cabin height and a 7’ 7 cabin width. There is sufficient room onboard for a full sized galley, full sized lavatory and seating for up to 19 passengers depending on configuration.

Performance is superb with three Honeywell TFE731-60 engines outputting 5,000 lbs of thrust each for a 455 Kts top speed at a maximum cruising altitude of 51,000. These engines are 50-60% more fuel efficient according to Honeywell and Dassault and allow for a maximum range of 4,750 nautical miles allowing you to “fly Beijing to Cairns, Shanghai to Moscow, Hong Kong to Sydney with no fuel stops”. The sheer amount of engine power also allows the 900LX to take off and land in the most demanding airports, furthermore, the 900LX has a spectacularly high maximum landing weight, which means that this business jet is capable of landing with nearly full fuel tanks (which is a rarity in large private jets).

Performance aside, the 900LX remains a top tier private aircraft for private ownership or even private charter. The cabin is incredibly well lit with 24 cabin windows and is wide enough to allow free movement in the cabin without too much crowding as seen in other large jets with massive seats. Cabin features are as expected for an aircraft of this calibre, with in-flight entertainment options as well as the ability to sport a full sized bed in a sealed cabin zone, spacious cabins of this scale are unheard of at the falcon 900LX’s price point. 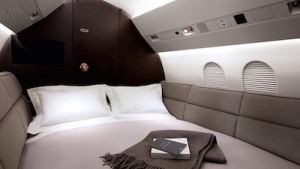 The original Falcon 900 can cost from $6,170 to $11,650 an hour to charter, and even the newer 900LX fits into the same price range. In terms of performance of comfort, very few large jets have the range and cabin space of the Falcon 900, in perspective, most high tier large jets can cost upwards of $10,000 an hour, and having a private bedroom on a private jet is something we’ve come to expect of much more expensive aircraft such as the Bombardier Global Express, but never a large jet of this scale.

In terms of convenience and availability, the Falcon 900 family is available worldwide for private charter with over 200 available for charter anywhere in the world. Contact us today is you are interested in booking a Falcon 900 jet or any other private jet for your travel or business needs. For more information about the Falcon family of aircraft and other private jets visit our aircraft guide.