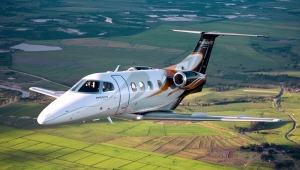 Embraer Executive Jets president Marco Tulio Pellegrini announced that deliveries would begin in the first half of 2017 and that Mexican charter operator Across and the Emirates Academy would be the launch customers. He also held open the possibility that the engine upgrade could eventually be made available to existing Phenom 100 customers as an aftermarket option, though an avionics upgrade to the Prodigy Touch system would not be practical due to its high costs.

Pellegrini also said that Embraer is contemplating an interior block change on the Phenom 100 at a later date, much like the one recently unveiled in the larger Phenom 300 on display this week at AirVenture. He said the Phenom 100E will likely be discontinued once the 100EV is introduced. “Once you have a better product, customers will go with a better product. We want to provide the best of everything.”

Pelligrini said thePhenom 100EV achieved its increased performance through a combination of increased engine thrust and airframe weight reduction. He acknowledged that the market for entry-level light jets remains “upside down” but said that in the “medium term we are confident that things will change and the market will be back” and that justifies Embraer’s investment in the Phenom 100EV. More than 330 Phenom 100s are currently flying. The aircraft also has been selected for the UK Ministry of Defence’s flight training program.

Seats for the Phenom 100EV, along with the Phenom 300 and the business aircraft seats in Embraer’s transport-category aircraft, will be built at Embraer’s new company-owned 80,000-sq-ft seating plant that will open in September in Titusville, Fla. Pellegrini said getting the passenger seats right is the key to maximizing the customer experience, and that drove Embraer’s decision to bring seating in-house on the Phenoms. “The seat is the customer touchpoint. If he feels comfortable, he is pleased. If he is not, he complains a lot,” he said.