HondaJet – A VLJ to wait for

Honda’s HondaJet was an unexpected first from an unexpected manufacturer. This very light business jet is being developed as a direct competitor to all existing very light jets by allowing new levels of performance and efficiency. The 7 seat HondaJet can fly higher, faster, and is more fuel efficient than it’s direct competitors. With a range of 1180 nautical miles, this private aircraft sits comfortably near other jets of its size, though this jet also has a maximum cruise speed of 420 kts, quite a feat for the tiny engines designed by GE and Honda. These engines were created 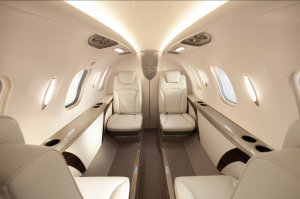 with efficiency in mind, by mounting the GE Honda / HF120 engines to the wings instead of to the fuselage, Honda allowed the cabin to be wider than competing private jets. Though each engine is capable of outputting 2050 lbf of thrust, Honda claims that these engines are up to 17% more fuel efficient than it’s competitors. This immense amount of thrust allows this tiny business jet to take off and land in any airstrip under 4000 ft, which is small enough for smaller, communal airports, as well as larger airports. The HondaJet’s fuselage replaces aluminum with a composite material for an additional 5% weight improvement. The aircraft noise levels are on the low end of the scale for very light jets both in-cabin and out. But improvement doesn’t stop there, the cabin and cockpit are outfitted with the very latest technologies we have to come to expect for the latest generation of business jets. The cockpit interface is exclusively occupied by touch panel screens, and the passenger cabin is home to mobile controllable lights, temperature, and windows. The cabin is large enough to house room for 66 cubic feet of cargo, three times more than any competing VLJ, and also large enough to house a fully enclosed lavatory with flushing toilet.

This very light jet is the perfect aircraft for shorter flights and small passenger counts. Typically configured for four or five passengers, the HondaJet is small enough to achieve faster speeds with greater efficiency. Typically Honda markets it’s newest jet to private owners and regional corporations who require a small fleet of business jets on hand. But the private jet charter market would open up even more affordable VLJ flights, and a large demand for HondaJets is sure to arise considering the minuscule operating costs, which means a cheaper fleet for aircraft owners and operators, but also for charter customers looking for smaller city hops for unbeatable pricing. The Hondajet is in the final stages of the FAAs certification process, but Honda has already started mass producing these aircraft, and has plans to start selling the aircraft in the second quarter of 2015. At $4.5 million, it looks to be a fine contender for a great ultra versatile private jet.