Pilatus Aircraft’s PC-24 business jet has entered the final stages of its certification programme, following the maiden sortie of its third and final test aircraft – the first in a production-standard configuration – on 6 March.

P03 – registration HB-VSA – took off from Stans at 09:45 local time for a 2h 5min flight across Switzerland.

Pilatus describes the debut flight as “another important milestone” in the PC-24’s development. It comes 22 months after the arrival of the first prototype kick-started the validation programme. Aircraft P02 joined the campaign in November 2015, and the pair have since logged more than 1,350 flying hours, the airframer says. 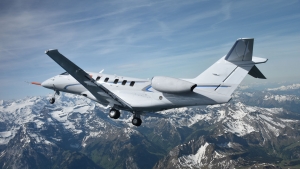 The PC-24 is branded a “super-versatile jet” by Pilatus, based on its large cargo door and its ability to take off and land on very short runways and unpaved strips. The aircraft is scheduled for certification and service entry in the fourth quarter.

US fractional ownership company PlaneSense is launch customer for the Williams International FJ44-4A-powered twin, with an order for six aircraft. The company is a long-standing Pilatus customer and the largest commercial operator of its PC-12NG single-engined turboprop with a fleet of 35.

Pilatus has secured 84 orders for the PC-24 – equivalent to three years of production – and is planning to reopen the orderbook following certification.

P03 will make its public debut in May at the European Business Aviation Convention and Exhibition in Geneva. The PC-24 was unveiled at the industry gathering in 2013.