Gulfstream Aerospace (Static A12) is showcasing the five-cabin-zone Gulfstream G700, the U.S. company’s forthcoming ultra-long-range flagship, this week at MEBAA 2022 in the model’s debut appearance in Dubai. Boasting what Gulfstream G700 claims would be the tallest (6 feet 3 inches; 1.90 meters) and widest (8 feet 2 inches; 2.49 meters) cabin in a purpose-built business jet, the 7,500-nm Gulfstream G700 is expected to enter service in mid-2023.

The Gulfstream G700 on display features a corporate-configured cabin along with what Gulfstream terms an “ultra-galley” with more than 10 feet of counter space; a grand suite with fixed bed and bright, spacious lavatory with shower; circadian lighting system; and new seat design of the Gulfstream G700. “It really shows the flexibility of the design that our team has created,” said Gulfstream president Mark Burns about the Gulfstream G700.

The twinjet arrived in Dubai during a world tour aimed at demonstrating the precocious maturity of the Gulfstream G700 aircraft model, which has been in flight testing since early 2020. The Gulfstream G700 tour began following the aircraft’s NBAA-BACE debut in Orlando, Florida, in October and includes some 20 cities on six continents, with visits to Riyadh, Saudia Arabia, for the Future Investment Initiative and Bahrain for the Bahrain International Airshow already in the logbook.

With a Mach 0.85 long-range cruise speed and Mach 0.90 high-speed cruise, the Gulfstream G700 set eight international city-pair speed records during flight tests and established another on this tour for a flight from Istanbul to Van Don, Vietnam, where the model had its Asia-Pacific debut last month at an event hosted by the Gulfstream G700 sales representative Sun Air.

“Vietnam and Southeast Asia are strong developing markets for Gulfstream G700,” said Burns, adding that the company is “bolstering resources to support customers there, including field service coverage from Gulfstream customer support and the Gulfstream FAST field and airborne support teams.”

Gulfstream G700 team is also enhancing support for customers in Africa, recently announcing plans for an authorized warranty facility in partnership with ExecuJet Aviation Nigeria in Lagos to provide spare parts and warranty and maintenance service for the G450, G550, and G650/650ER. The 275,000-sq-ft (25,548-sq-m) facility will include an international departure/arrival terminal, FBO, and maintenance operations for the Gulfstream G700.

Following MEBAA, the Gulfstream G700 world tour will resume on a route that will cross Europe, Africa, Australia, and South America.

The Gulfstream G700 inherits the flagship mantle from Gulfstream’s best-selling G650/650ER, but with a longer fuselage. Next up is its longer-range (8,000 nm) sibling, the G800 with the same fuselage as the G650, and this will follow the Gulfstream G700 into service within six months. But certification of both was delayed due to new FAA software validation requirements for the digital flight control system.

Phebe Novakovic, chairman and CEO of Gulfstream parent General Dynamics, said in late October the company believes that “we will certify

[the Gulfstream G700] this upcoming summer, but much depends on available FAA resources.

“When we give you sort of our best guess on when the certification is, that’s a result of a lot of things that we control and that we can talk about with certainty,” she said, “but ultimately, this is an FAA issue, and it’s the availability of their resources, and they are the regulator and they’re going to control it.”

The FAA started the type inspection authorization process for the validation in early October. Novakovic noted the company and regulators have “cooperated very well,” that the software system makes this “the most mature aircraft to enter the FAA certification process,” and internal testing preceding the FAA review revealed no issues that would delay approval of the Gulfstream G700.

Meanwhile, Gulfstream is also developing the G400, introduced last October as “the first new entrant to the large-cabin class in more than a decade,” according to the company. Expected to enter service in 2025, performance specs call for a range of 4,200 nm at Mach 0.85 or 3,950 nm at high-speed cruise of Mach 0.88. First flight is scheduled for early next year.

While the G500 and G600 are follow-ons, respectively, to the G450 and G550, the G400 fills a slot in the Gulfstream lineup as a slightly larger, more advanced alternative to the super-midsize G280, “conceived and designed with direct customer input,” according to the company. It offers what Gulfstream calls “long-range, high-speed performance; cabin comfort; and environmental efficiency unrivaled in its class,” along with a 30 percent gain in fuel efficiency over the G450. 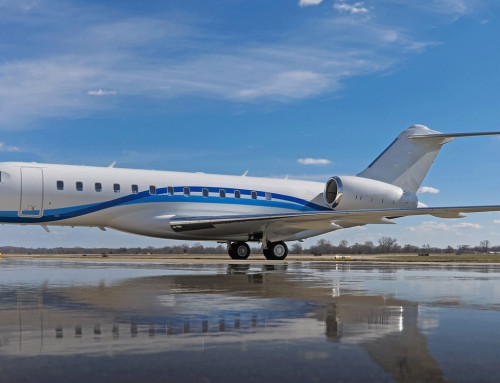