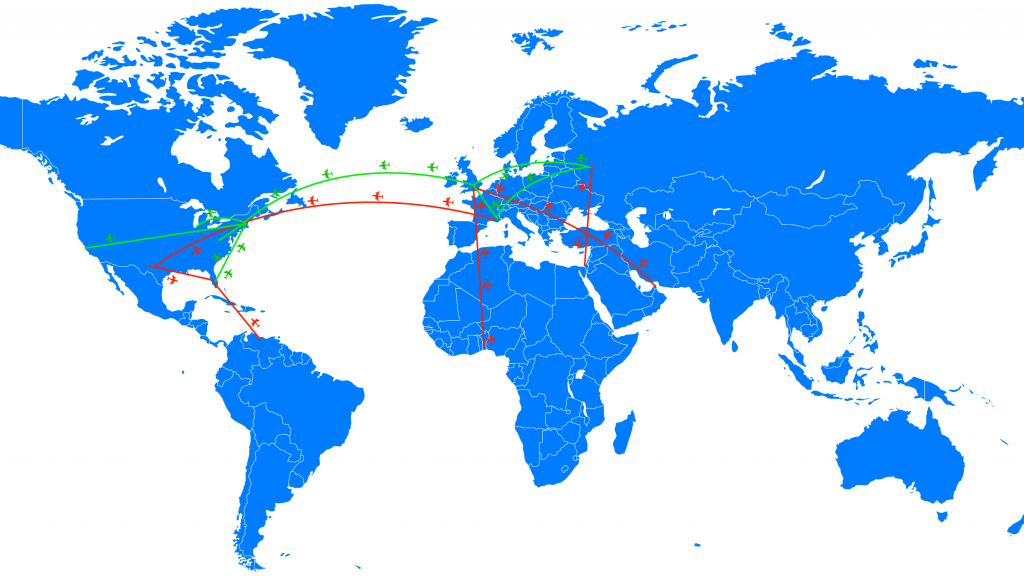 Private Jet Routes: Ever seen a private jet in the sky? Chances are it’s on its way to NYC, or on the way back.

Out of the most traveled jet routes in 2013, Knight Frank mentioned in his wealth report that 7 out of 10 private planes were flow in, or out of New York City. However,  the most popular out of the private jet routes was UVVV to LFMN. Moscow, to Nice-Cote d’Azur Airport.

Based on our statistics, these are the top 5 itinerary rankings:

Top 5 Private jet routes for the past two years.

More than half of the traffic begins or ends somewhere in the states, mainly focused in the east coast. In Europe, statistics showed high interest for private jet users focused in London, Moscow, and Nice-Cote d’Azur. The passengers used routes between these cities. China’s private aviation market is also expected to grow once the government relaxes its set of laws. Currently, the third largest market is the Middle East.
Knight Frank also mentioned in his report that many of the chartered private jet routes are growing tremendously since 2013. LFMN Nice -Cote d’Azur in France, to KTEB- Teterboro, NJ was the most noticed route for its growth. The top 5 list is as followed:

Many might wonder the reasoning behind the link between LFMN and KTEB, as many of the other routes used by private jet passengers usually link the major business hubs. The answer is simple: “It’s the Russians. They like to mix business with pleasure”. “There are so many Russians who own properties in the Nice/ Cote d’Azur area of France. They frequently travel to the states and London for business.” said Liam Bailey, the global head of research.

One of the noticed and unexpected growths is the Texas market. Most of the VIP flights out of Texas are for business, and not recreational purposes. More than half of these fliers are people who made the switch from commercial flights.

Also, one of the locations that didn’t make it on our top 5 charts is also experiencing very high demands. Ibiza notice an almost 20% increase in traffic over the past year.
As these fastest growing flights are expected to stay steady for the near future, with an exception to Russia as its situation develops with Ukraine. The 15% decline was noticed since last summer.