Our Favorite Private Jet Moments from 2014

Previous Next
Our Favorite Private Jet Moments from 2014

Our Favorite Private Jet Moments from 2014

Merry Christmas and Happy Holidays from the Aircharter.com team! We here at Aircharter love our private jet photos, and included are our favorite 7 photos from 2014. Featured above was our aircraft of choice for transporting the Ghana National team to the FIFA World Cup in June of 2014. This 767 was selected especially for nonstop travel straight into brazil in a comfortable widebody; Featured in CNN’s “Great World Cup Airplane Paint Jobs”.

The flight testing LearJet 85, shown here arriving in Orlando for NBAA2014. At this point, this Learjet had completed over 60 successful test flights. Starting with it’s first flight in spring of 2014, this aircraft has never ceased to amaze, as the largest, and fastest learjet ever made. Capable of transporting 8 passengers up to 3,000 nautical miles.

The learjet 85 teaser. At this point, we had yet to see anything except cabin mockups and approximate specifications. Later in 2014, flight testing would begin for expected delivery in 2016 or 2017. This angle of the learjet 85 makes the aircraft look much larger than it actually is, perhaps foreshadowing a mid sized lear sometime soon.

The interior of a mockup Gulfstream G600 shown at NBAA2014, an all new aircraft to join the Gulfstream family. As it’s name suggests, this will be right in between the G550 and G650 in terms of size and range capabilities. This large jet can be configured for up to 19 passengers with a very long cabin that while smaller than the G650, feels very comfortable.

A G550 at the Marrakesh Airshow in spring 2014. The true scale of the G550 is seen here, the G550 is an enormous aircraft, and still remains the runner up (currently) to the G650 which is even more massive in terms of length and even wingspan. With a length of 96 feet and a wingspan of 93 feet, this jet is a giant in terms of private aircraft.

Here we see the citation Latitude also arriving in Orlando, FL for NBAA2014. A new addition to the citation family, the latitude is a very strategically placed aircraft. Capable of 2,700 nm range and carrying 9 passengers, this mid sized jet can take off in under 3,700 feet, which is quite a feat for an aircraft of this size.the latitude boasts great fuel efficiency and climb rates at a reasonable purchase price of ~$15,000,000. 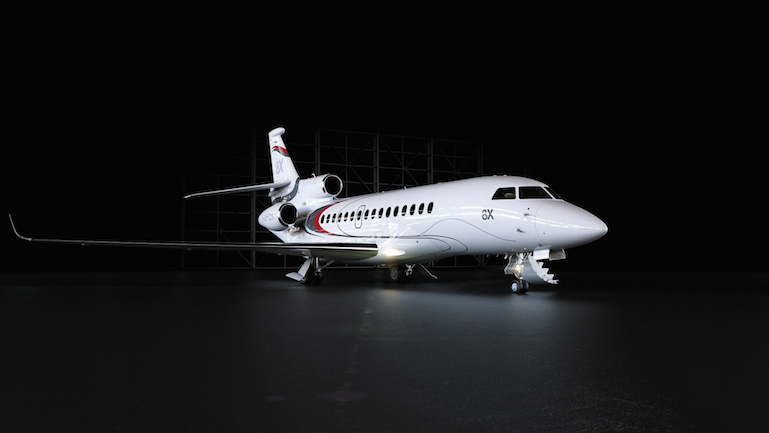 The long awaited Falcon 8X, another teaser mockup from a manufacturer. The Dassault Falcon 8X closely resembles the Falcon 7X, not only in exterior style, but also interior configurations. The 8X has a slightly longer and wider cabin, and increased range to a mighty 6,450 nautical miles. Estimated to cost approximately $57 million, this private jet will have to prove itself against other super long range and heavy jets.