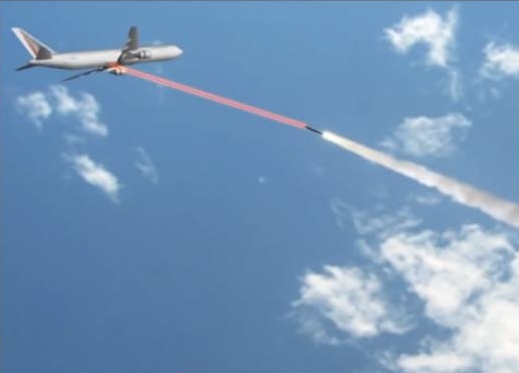 This simulation shows a laser fired from under the aircraft intercepting an incoming missile. (Image source: YouTube)

Israel-based Bird Aerosystems has announced the availability of its latest anti-missile defense pod for Private Jet, designed for airliners and bizliners, the latter including the Airbus ACJ320 and Boeing BBJ. To help counter what it said is a growing threat of man-portable air defense systems (manpads), the company’s Aeroshield pod incorporates five sensors that detect when an air-to-air or surface-to-air missile has been launched. It also has one sensor that can detect when a missile is approaching, as well as two-to-four flare dispensers (to divert heat-seeking missiles) and an inertial measurement unit.

The company also noted that the small-footprint Private Jet Anti-missile Protection Pod is easily installed, can be readily transferred from aircraft to aircraft and provides effective protection “with minimal interference to the aircraft.” Besides airborne missile protection systems, Bird Aerosystems also specializes in airborne surveillance, information and observation equipment.

Israel has successfully completed a series of tests of an anti-missile defense system for passenger jets, the system’s manufacturer and Israel’s Defense Ministry announced.Elbit System’s C-Music system – whose Hebrew name translates to “Sky Shield” – is designed to protect commercial airliners against shoulder-fired missiles.

Israel’s Army Radio reported that several Israeli passenger planes have already been outfitted with the gear.

“C-Music” is designed for both fixed-wing aircraft and helicopters. The acronym stands for Commercial-Multi Spectral Infrared Countermeasure.

The system detects incoming missiles with a thermal camera. When the missile reaches a certain proximity to the aircraft, the system fires a laser at the missile’s seeker which deflects it off of its trajectory, allowing it to explode at a safe distance from the aircraft.

“The experiments, carried out in southern Israel, were some of the most complex and sophisticated ever carried out in Israel,” the Defense Ministry said in a statement Wednesday. “They simulated a range of threats that the C-Music system will have to deal with.”

“C-Music is considered the most advanced system of its kind in the world, and will provide ultimate defense to planes,” the ministry said. “It combined advanced detection and disruption technologies, and meets the stringent requirements of commercial flight.”

Another view of the system designed to protect passenger planes against shoulder-fired missiles. (Photo: Israeli Defense Ministry and Elbit Systems)Elbit Systems President and CEO Bezhalel Machlis said the system is applicable both to commercial and military jets and that the defense contractor has already received orders from the Brazilian and Italian air forces.

Here is a dramatization posted to YouTube of the system in use: 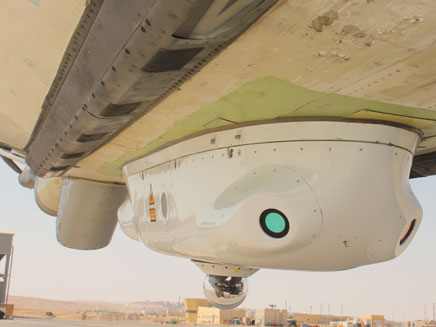 Israel’s Transportation Ministry said the system will now be installed on Israeli airliners.

In 2002, terrorists fired shoulder-launched missiles at an Israeli Arkia Airlines passenger plane as it was taking off from Mombasa in Kenya.  The two missiles missed their target and the plane landed safely in Tel Aviv.

On several occasions in recent years, Israeli airlines were instructed to halt domestic service to the southern port and resort city of Eilat due to the threat of possible shoulder-fired missile attacks from terrorists operating in the bordering Sinai Peninsula in Egypt.