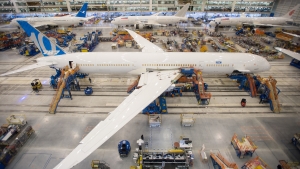 Boeing rolled out the 787-10 widebody airliner assembled at its North Charleston, South Carolina, facility on February 17 in a rousing ceremony headlined by U.S. President Donald Trump. The longest variant of the Dreamliner family, the 787-10 now begins the flight-test phase in advance of planned first deliveries next year.With the deep blue and white fuselage of the first 787-10 serving as a backdrop, Trump, who was introduced by Boeing CEO Dennis Muilenburg, delivered a campaign-style speech that emphasized his “America first” philosophy. “I have to say, that is one beautiful airplane,” the president said, motioning toward the Dreamliner. “What an amazing piece of art; what an amazing piece of work.”

In his 16-minute speech, Trump made references to the Boeing 747-8 that will serve as the new Air Force One around 2023, and the Boeing F/A-18E/F Super Hornet that has been held up lately as competition for Lockheed Martin’s F-35 Lightning II.

“We’re going to rebuild our military,” Trump told the audience of several thousand Boeing employees and visitors. “By the way, do you care if we use the F-18 Super Hornets? We are looking seriously at a big order,” he added.

Boeing staged the roll-out ceremony two days after production workers in South Carolina decisively voted against joining the International Association of Machinists & Aerospace Workers,maintaining their status as a non-union shop. The manufacturer assembles Dreamliners at both its Everett, Wash., and North Charleston facilities, but the 787-10 will be assembled exclusively in South Carolina.With seating for up to 330 passengers, the 787-10 is 18 feet longer than the 787-9 Dreamliner, but retains 95 percent design and build commonality with the earlier version. Boeing lists the 787-10’s range at 6,430 nm, while the 787-9 operates to a range of 8,500 nm. The manufacturer currently has 149 orders from nine airline customers for the 787-10.

The industry-leading technology of the 787-10 Dreamliner is creating remarkable opportunities for airlines around the world and dramatically improving the air travel experience. We call it the Dreamliner effect. The airplane’s unparalleled fuel efficiency and range flexibility enables carriers to profitably open new routes as well as optimize fleet and network performance. And for their passengers, an experience like none other in the air, with more comfort and less fatigue. The Dreamliner effect. That’s a better way to fly.