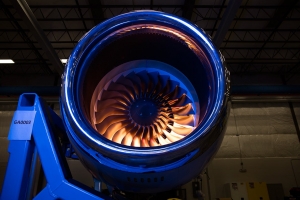 P&WC (Pratt & Whitney Canada)  has received U.S. certification for its new PW814GA and 815GA turbofans that will power the Gulfstream G500 and G600, respectively. The FAA validation, granted on February 24, comes as Gulfstream prepares for initial deliveries of the G500 later this year and of the G600 in late 2018.

Gulfstream is the launch customer for P&WC engines’s new 16,000-pound-thrust PurePower PW800 turbofan that shares a common core with the Pratt & Whitney PW1000G Geared Turbofan engine. P&WC began core testing on the engine in 2009 and first flew it in 2013. The engine maker secured Transport Canada certification for the PW814GA/815GA in early 2015, just a few months after the unveiling of the 5,000-nm G500 and 6,200-nm G600.

Along with the engines, P&WC is supplying an integrated powerplant system for the aircraft that includes nacelles and thrust reverser systems.

The new engine incorporates a full authority digital engine control (Fadec) system with advanced diagnostics and lightweight materials such as titanium and composites that are designed to improve performance and dispatch availability. P&WC estimates that the engines provide double-digit improvements in fuel efficiency. In addition, the engines incorporate P&WC’s Talon X combustor, which provides a double-digit margin in meeting international NOx emissions targets.