Previous Next
Embraer Deliveries Decline in First Quarter of 2017 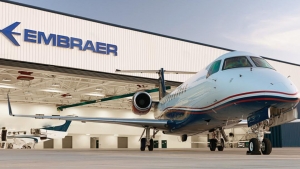 Brazilian airframer Embraer delivered 33 aircraft in the first quarter of 2017—18 commercial airliners and 15 executive jets. The figures announced on April 13 represented a 25 percent drop compared with the 44 aircraft delivered in the same period of 2016 (21 commercial jets and 23 executive jets).

The 18 commercial airliners consisted of 16 E175 jets and 2 E195 jets that were delivered to operators in Europe, China and the U.S. Meanwhile, the 15 executive jets consisted of 11 light jets and 4 large jets. Embraer’s firm order backlog, as of March 31, was valued $19.2 billion, 12 percent down on the $21.9 billion figure for the first quarter of 2016.

In the business aviation sector, Embraer’s main achievement was the recognition by the General Aviation Manufacturers Association of its Phenom 300 as the best selling executive jet in the world for the fourth succesive year. While the Phenom 300 has amassed 266 deliveries since 2013, the first of the new Phenom 100EV model was delivered to an undisclosed U.S. customer during this quarter.

During the first quarter of this year, Embraer achieved the rollout and first flight of the E195–E2 ahead of schedule. Azul Brazilian Airlines will be the launch operator of the E195–E2, followed by Scandinavian carrier Widerøe, in next year’s first half.