Aircraft of the Week – Global Express 6000

The Bombardier global express 6000 is an aircraft well known in the business aviation community and beyond. Global Express has become synonymous with top-end luxury. Occasionally, it is hard to group business jets into categories, jets like the Learjet 45 for example is hard to classify as a Light Jet or a Mid jet and is often put into a “Super Light Jet” category that sits between the two. The Global express 6000 is undoubtedly a long ranged heavy jet, there is no doubt about this aircraft. At nearly 100 feet long and with a 94 foot wingspan, this aircraft is a giant. Boasting a 6 ft 2 inch cabin height and a 7 foot 11 inch cabin width at it’s widest point, the Global Express 6000 cabin is not only tall enough for the majority of passengers, but also wide enough to accommodate a full sized bed and full sized bathroom with a shower. The cabin is filled with natural light though it’s 28 large squared windows, which at a glance from outside, look very small, but once in the cabin, you can see the massive size of these windows. 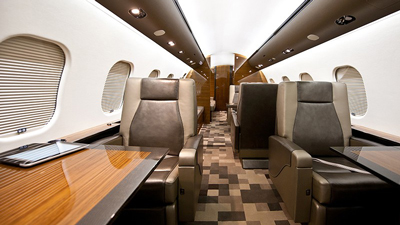 The Global 6000 offers a range of features, both expected and unexpected for a private aircraft of this size. The forward area of the cabin can house a crew rest area, allowing for the capability of swapping crews to allow longer flights with little risk of tired crews. Behind this area is a full sized galley, which traditionally hosts a large area to hold and prepare even the most difficult of foods. The cabin itself has dedicated temperature zones, allowing different parts of the cabin to remain at different temperatures for the comfort of the passengers and crew. Inside the cabin is enough room to freely move about, sit or lay down, or meet at the club configured seats with tables. there is enough room to sit multiple entertainment systems allowing for in-air audio and video enjoyment. It doesn’t stop there either, even the lavatory has its perks; the lavatory not only offers enough space for a shower, but also two large windows. No other large business jet offers this option for customers. The slurry of advanced electronic systems in this aircraft are too numerous and complicated to discuss in detail, but consist of Synthetic Vision Systems, High resolution Enhanced Vision Systems, SATCOM, and the Bombardier Vision Flight Deck, which reduces the pilot workload significantly. These systems work together to enhance the pilot’s ability to see and navigate even when weather conditions are unfavorable.

This long ranged business jet is capable of transporting up to 19 passengers and is capable of a maximum range of 6,000 nautical miles, or 11,112 km. Though standard configurations are for 12 passengers, it can be configured in a higher density configuration. The large size of this aircraft means a 7000 foot required runway length, which unfortunately does not include smaller municipal airports, though the majority of executive airports worldwide should be capable of accommodating the Global 6000 without an issue, and the Global 6000 cruises at a very quick mach .85, a speed usually reserved for smaller, most speed-oriented aircraft such as the Citation X. All in all, the sheer amount of customization that can be offered on the Global Express 6000 is mind boggling and makes this aircraft doubtlessly worthy of the title of this week’s aircraft of the week.