Dassault launch Falcon 6X as a replacement for the X5

Dassault launch Falcon 6X as a replacement for the X5

Dassault has launched the $47 million Falcon 6X, as the replacement for the Falcon 5X that the company was obliged to cancel last year. 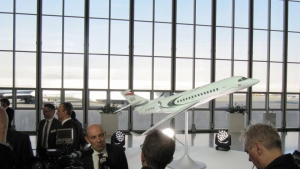 The Falcon 5X was officially canceled in December 2017 following continuing issues with the Snecma Silvercrest engines that were due to have powered it.

Swapping to PW812D engines means that the aircraft will also be more fuel efficient than its abandoned predecessor, as well as being able to fly further. The Falcon 5X was projected to have a range of 5,200nm, but the Falcon 6X will be able to fly 5,500nm.

The cross-section from the 5X is reused but has been stretched by 20 inches. The structure of the wing has also been completely redesigned, with a new structural aerodynamics.

As with most other Falcon aircraft, the 6X will be able to use steep approach paths and short runways, including those at Aspen and London City airports.

The Falcon 6X cabin is six feet, six inches (1.98 m) high and 8 feet 6 inches (2.58 m) wide — the highest and widest cross section in a purpose built business jet – and is nearly 40 feet 8 inches (12.3 m) long. The cabin can accommodate 16 passengers in three distinct lounge areas, affording room for multiple configurations including a large entry way/crew rest area and a spacious rear lounge.
Every element of cabin style and design has been totally rethought, the result of an extensive survey of customer tastes and inputs from Dassault Aviation’s own in-house Design Studio. Flowing uninterrupted lines enhance the feeling of space and declutter the cabin.
Significantly more natural light floods into the cabin thanks to 29 extra-large windows including a unique galley skylight – the first in business aviation – designed to provide additional brightness in an area usually devoid of natural light.
“The industry has been moving towards ever wider and higher interiors, and customers told us what they wanted most in our new Falcons was more space,” continued Trappier. “So we designed the Falcon 6X from the cabin out, making it as passenger-centric as we could while still delivering the high performance and other flying qualities that customers value in Falcons.”

The Falcon 6X is due to fly for the first time early in 2021, with certification and first delivery in 2022.