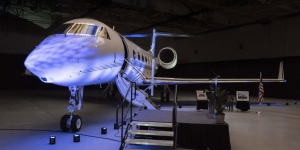 Gulfstream Aerospace Corp. today announced that it has delivered the final Gulfstream G450 as it prepares to usher in the next generation of business aviation with the all-new Gulfstream G500.

“For the past 12 years, the G450 has been one of the best-selling business jets in the industry, beloved by pilots and passengers alike for its technological advances, smooth handling, impressive range and unsurpassed passenger comfort,” said Mark Burns, president, Gulfstream. “During its 30-year history, the GIV series transformed business aviation, and the G500 is already well on its way to doing the same, with the industry’s first active control sidesticks and the most integrated application of touch-screen controls in the flight deck.”

“It made its mark in aviation history and remains an important member of the Gulfstream family. We will continue to provide industry-leading product support and sustaining engineering for our G450 customers,” Burns said. The G500 will deliver more range than originally announced. The aircraft will fly 5,200 nm/9,630 km at Mach 0.85 and 4,400 nm/8,149 km at Mach 0.90. The G500 is in flight test with five aircraft in the test program. The first test aircraft made its first flight in 2015. The fourth test aircraft made its first trans-Atlantic flight in July. The fifth aircraft is a fully outfitted production aircraft that focuses on the cabin interior. The flight test program has amassed more than 1,600 flight hours. A G500 simulator is operational and in use at FlightSafety International in Savannah. Five G500 aircraft are undergoing flight testing, with type certification anticipated in early 2018.