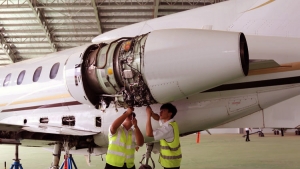 Four years after the rules for travel between the U.S. and Cuba began to relax, aircraft repair services still remain in short supply in the island nation. But the easing of rules in recent years facilitates bringing in parts, mechanics, or other supplies to support aircraft that encounter AOG situations in Cuba, said Eric Norber, founder of Cuba Handling.

When the U.S. opened the door to travel to Cuba, the ability to repair aircraft in country was a chief concern. “There is not a lot of local mechanics or repair shops available in Cuba,” said Norber. “But, knowing that, Cuban authorities put in place in a policy that opens the door for whatever support you need you can bring in. It’s just at the expense of the operator.”

With the policy changes, he added, “There is no customs process. There’s no immigration for mechanics. It is really open access for the support or repair of any AOG aircraft in Cuba.”

On the U.S. side, the removal of Cuba from the list of nations with certain export bans in 2016 eased the ability to bring in parts and equipment necessary for support.

Cuba Handling, which has specialized in Cuban operations handling for more than 27 years, has assisted aircraft operators with issues as small as tire changes and to as large as an engine swap, he said, adding the latter being on an airline airframe. All were completed on the ramp in Cuba by U.S. mechanics. Norber cautioned that travel logistics, such as hotels and transportation, must be arranged through a handling company.

Some MRO shops from around the world have held discussions with the Cuban government over the possibility of opening a facility there, Norber said, adding he was not yet aware of any concrete deal that has resulted from that dialog. Importantly, though, he said, “The Cuban government is open to discussion for assistance from some aviation companies outside of Cuba to help them keep up their aviation infrastructure, whether that be FBOs or repair shops.”

Norber noted that Cuba still remains a largely cash nation. Any services required in Cuba that are not preplanned and/or paid through a handling company will require cash payment. Services, such as fueling, should be arranged in advanced, Norber stressed.

Cuba does not have private terminals for business and general aviation. However, he said, in the past four years, “the Cuban infrastructure for welcoming or supporting private or general aviation aircraft has improved. While there are no FBO-style facilities or VIP lounges, they have substantially improved their training, procedures, and the overall quality of services they are providing to private aircraft arriving in Cuba.”