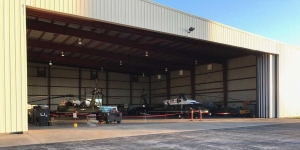 Awaiting the arrival of the President for a tour of hurricane-affected area in Florida, Marine One sits sequestered in a hangar at PrivateSky Aviation Services, the lone FBO at Southwest Florida International Airport. The two helicopters arrived last night aboard a pair of C-17 transports. Air Force One is expected to arrive there tomorrow.

Life is slowly returning to normal at Naples Municipal Airport in Florida, which clocked wind speeds of 142 mph at the height of Hurricane Irma’s landfall on Sunday. Power was restored to the airport-owned FBO early this morning, but airport manager Christopher Rozansky noted that lack of sufficient fresh water remains a problem. He said the airport expects to issue a Notam announcing a limited opening tomorrow at 2 p.m. on a prior-permission-required basis for daytime VFR only. But with airport staff still returning to the region, he asked for patience on the part of aircraft operators and owners.

Naples Jet Center, the other provider on the field, is still without power, owner Matthew Hagars told AIN this morning. He plans to send some of his crew to help out at the Naples Airport Authority FBO today.

In Fort Myers, power has been restored to Page Field, which reopened this morning with full fuel service. Nearby, Southwest Florida International Airport did not officially close during the entirety of the hurricane. Vincent Wolanin, owner of PrivateSky Aviation Services, the lone FBO on the field, rode out the storm in the facility’s Category 5-rated concrete structure, along with many of his staffers and their families.

According to Wolanin, the facility lost power early Monday morning, hours after Irma had passed by, but its massive generator immediately fired up, providing ample electricity for the entire location until main power was restored yesterday. Wolanin said the FBO handled 150 flights on Tuesday as homeowners returned to assess the damage. Tomorrow, the facility expects to play host to Air Force One, as two supporting C-17 transports arrived last night carrying a Marine security detail, Marine One and the Presidential limousine.