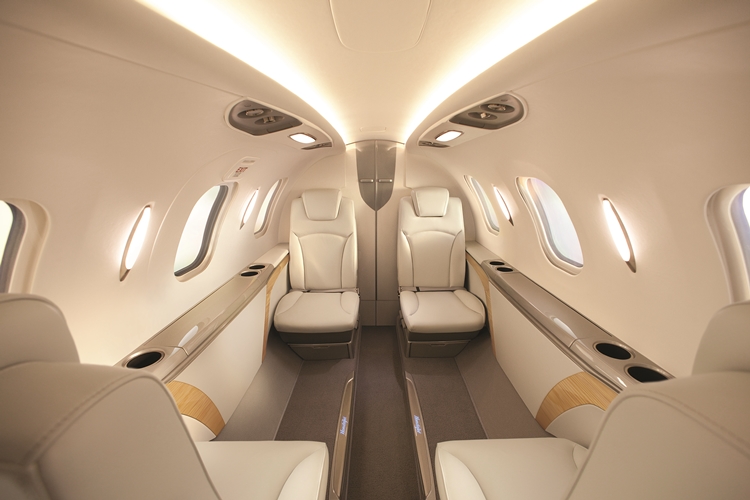 To say that the HondaJet has been one of the mostly closely followed business jet developments in history is something of an understatement. It is also not to everybody’s taste.

It does stand out, though, as it is currently the only business jet that has its engines mounted above its wings.

This makes it look different and, while looks are not the main reason why people buy aircraft, it is refreshing to see an aircraft that does not look like every other business jet.

But Honda Aircraft did not design the aircraft to look different, as there are several advantages to having this engine configuration. The most important one is that it reduces drag on the leading edge of the wings, which has the dual advantage of letting the aircraft fly faster while burning less fuel.

As a result, the HondaJet is one of the fastest aircraft in its class.

It is also one of the most comfortable in its class, although, being a very light jet, it is not designed to fly long distances.

You do not buy a very light jet and expect to be able to party on it, or to sleep as you cross oceans. You expect to get a functional cabin that is comfortable for journeys of several hours or less.

But the cabin of the HondaJet is one of the selling features. Step inside and you will be forgiven for thinking you are in a much larger aircraft.

Honda Aircraft has borrowed from its parent company’s knowledge of car interiors and come up with a refreshingly fresh interior. The standard configuration is for two forward-facing club seats, two rear seats – with very good leg room – and a single divan opposite the door. The seats are adjustable and comfortable. It also has a toilet – something that not all light jets have.

There is a decent amount of space at the front and back for bags, especially compared to its light jet competitors. Passengers can also control air conditioning and lights with their mobile phones.

One advantage that the HondaJet has through the sales process is that the manufacturer can finance the purchase for you, although this is currently only available to customers in the US. Financing for smaller aircraft has been notoriously difficult to get, so it is likely that this approach has helped in a handful of sales.

The total variable costs for flying 200 hours a year are $245,700. This figure assumes that fuel is $3.99/gal, and includes maintenance reserves, as well as crew and handling etc charges.

As of 1 November 2017, Honda has built 85 HondaJets. Of these, the largest concentration is in North America, where 78 aircraft, some 91%, operate. Outside North America, four aircraft operate in South America, with a further three operating in Western Europe.

Unusually for an aircraft type, as soon as the production process is begun, the aircraft is placed into trust with Wells Fargo Bank Northwest. A search on the US Civil Aircraft Register online shows a number of these aircraft, thereby artificially inflating the current number of aircraft in service. Caution is therefore needed, when trying to extrapolate the current number in service, to not include these.

While the AMSTAT database, and no doubt others as well, shows that there are 85 aircraft in service, at least 20 of these are attributed to Wells Fargo, but are currently being built.

Honda’s strategy has been to slowly build up its sales presence around the world, as and when it decides that the market will justify it. Recently the company announced a partnership with a Honda car dealer in China, which will cover sales in Hong Kong, Taiwan, Macao and the.

As with all business jet manufacturers, Honda does not release details of order activity, unless it is a large fleet order or it is of particular significance.

In May 2017, it did release details of a fleet order from a new European operator based on the Isle of Man, although, rather than releasing the number of aircraft ordered, Honda chose to just say “multiple orders”.

Several other one-off orders are known, including aircraft destined for Thailand, Argentina and Germany. In 2016, Michimasa Fujino, the head of the company, stated that approximately 20% of all orders were from customers in Europe.

The HondaJet overtook the Embraer Phenom 300 in the first half of 2017 as the most delivered aircraft type. Overall, Honda delivered 24 aircraft, one more than the 23 Phenom 300s delivered. Fujino said that he was aiming to keep this title as long as possible. Delivery guidance for the year has been unavailable, however traditionally more aircraft are delivered in the last half of the year versus the first half, as manufacturers rush to close off their year accounts.

Future deliveries that we are aware of include the first aircraft destined for a customer in Thailand. Fujino said in an interview in November 2017 that he sees great potential for the HondaJet in southeast Asia, specifically mentioning Thailand, Malaysia, Indonesia and the Philippines.

Currently the company manages its Asia sales processes through its North American headquarters. However, as noted above, a sales office will soon be established in mainland China.

The AMSTAT database shows that there are currently 11 aircraft, some 13% of the current fleet, available for sale. This number could be seen as artificially high based on the relatively recent introduction of the aircraft.

The average asking price for an aircraft on the pre-owned market dropped by 5.5% between the beginning of the year and 1 November. There were only two sales during this period, with both transactions taking place between buyers and sellers in North America.

Of the 11 aircraft currently available for sale, ten are operated in North America, with the remaining aircraft being one of three operated in Mexico. However, the owner of this aircraft is Aerolineas Ejecutivas, which is listed as the sales agent for the aircraft in the country.

HondaJet does have several representation agreements in place in South America. An agreement was signed with Seijiro Yazawa Iwai Aviation INC in October 2016 to be the dealer throughout what Honda calls the “Middle Americas”, a territory stretching up to, but not including, the border with Mexico to the north and the southernmost border of Venezuela to the south.

Sales in Brazil are managed by Lider Aviacão, with the rest of Latin America managed from the global headquarters in North America.

The HondaJet fits into the Very Light Jet category. This category is for the smallest business jets currently available, which normally seat between four and eight people. The original classification was based on weight, with VLJs having a maximum takeoff weight below 10,000kg. However the HondaJet, like the Phenom 100, CitationJet and Citation M2, is above this.

As a general rule, VLJs have a maximum range just above 1,110 nautical miles. The exception to this is the Citation M2, which can fly for just over 1,550nm

The HondaJet is in the Very Light Jet category and, looking at the sector as a whole, we can begin to get an idea about how the pre-owned market might look once there are substantial numbers of aircraft available.

Again using the AMSTAT data, we can see that 10.78% of the global fleet is currently available for sale. This percentage is above the 10% threshold that analysts will define as a “soft market”.

In a soft market there is a high percentage of aircraft available for sale, which drives the sale prices lower. It often also means that an aircraft will stay on the market for longer.

When analysing the market, it is important to understand the imbalance between aircraft ages. Aside from the Embraer Phenom 100, the majority of aircraft in the VLJ sector are at least ten years old. Therefore, the average age of aircraft for sale in this section is 11+ years.

This skewing of data in favour of newer aircraft means that it is impossible to analyse any possible depreciation curve for the HondaJet, as the market conditions for the Very Light Jets were a lot different during their first few years. It is also worth noting that the largest percentage of aircraft currently available in the VLJ sector are the CitationJet and the Citation Mustang, both of which are no longer in production.