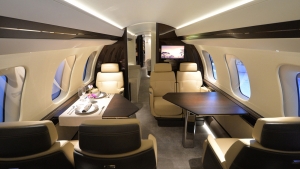 With the unveiling of FTV4 (flight test vehicle 4) at Henderson Executive Airport on Sunday, Bombardier introduced the Global 7000, claimed to be the world’s largest purpose-built business jet, at NBAA 2017. The clean-sheet, $72.8 million ultra-long-range jet features a four-zone cabin with galley and crew rest suite; a 7,400-nm range; and what the company says is the smoothest ride in its class due to the “optimized” aerodynamic characteristics of its wing.

“There is no airplane in the market like it,” said Michel Ouellette, senior v-p of the Global 7000/8000 program, adding that the jet “will meet all its performance targets” and is on track for entry into service in the second half of 2018. Eight customer aircraft are currently on the production line at Bombardier’s Toronto facility.

The Global 7000’s performance benchmarks include short field and high/hot capability, opening London City, Aspen and other challenging airports to the Global, and a Mach 0.85 typical cruise speed (Mmo is Mach 0.925 and high-speed cruise is Mach 0.90), shortening travel time between city pairs such as New York-Dubai, London-Singapore and Los Angeles-Shanghai, Ouellette said.

Bombardier’s flight-test program will employ five FTVs, each named for its specific mission in the validation and certification program. Four are currently flying.

FTV1, dubbed the “Performer,” has notched more than 140 flights in its workhorse role and achieved a level flight speed of Mach 0.995 early in the program. FTV2, the “Powerhouse,” whose maiden flight was in March this year, concentrates on powerplant, hydraulics and aircraft systems tests.

The “Navigator,” FTV3, is tasked with avionics and electrical systems. It reached 51,000 feet on first flight, and also conducted an 8,000-mile mission in which it spent three minutes north of 89 degrees latitude—essentially the North Pole. FTV4, the “Architect,” on static display this week at the NBAA show, is outfitted with a certification interior and is being used as the testbed for all cabin systems and furnishings. It first flew on September 28.

FTV5, the “Masterpiece,” outfitted with a full production interior and due to make its maiden flight shortly, will become the company’s Global 7000 demonstrator.

In total, the four FTVs have accumulated more than 900 hours of flight time, Bombardier said. The company is not releasing milestone figures on total flight hours certification is expected to require.

The world debut at Las Vegas comes seven years after the company unveiled the Global 7000/8000 program in the 2010 edition of NBAA, also held in Las Vegas.

The Global 8000—a longer range but shorter variant of the platform—has been scheduled to launch a year after the 7000’s EIS, but at a pre-show briefing David Coleal, president of Bombardier Business Aircraft, said the company “will make a decision on

The Canadian airframer also announced sales of two additional Learjet 75s to the UK’s Zenith Aviation, making it Europe’s the largest operator of the light jet.