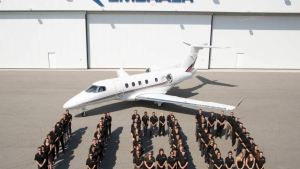 On May 4, Embraer delivered its 1,100th business jet—a Phenom 300 that was handed over to fractional provider NetJets. (Photo: Embraer Executive Jets)

Embraer delivered its 1,100th business jet on May 4, some 15 years after delivering the first Legacy (it did not use model number designations at that time, but it later would be known as the Legacy 600). The milestone aircraft—a Phenom 300—was handed over to fractional provider NetJets at Embraer Executive Jets’ customer delivery center in Melbourne, Florida.

“Embraer scored the four-digit mark in business jet deliveries in an impressively short period of time,” said Embraer Executive Jets president and CEO Michael Amalfitano. “NetJets has been integral to our success story by co-creating a premium product to meet the tastes of their owners.”

To date, more than 670 customers are flying 1,100 Embraer business jets—ranging from the entry-level Phenom 100 to the Lineage 1000 bizliner—in more than 70 countries.