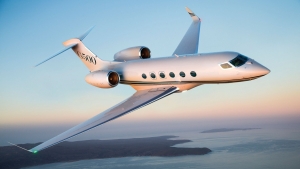 The G500 recently marked its longest flight on a mission from Savannah, Ga., out past San Francisco over the Pacific Ocean and back to Savannah. (Photo: Gulfstream Aerospace)

Gulfstream continues to check off milestones for its G500 and G600 programs with a G500 recently logging its longest test flight and a third G600 set to fly today for the first time.

The G500 has remained on track for service entry this year, with five flight-test aircraft amassing 2,750 hours and more the 640 flights by mid-April. The program earlier this month logged its longest endurance flight when a G500 flew 10 hours, six minutes across the U.S. The flight, which was used to test the onboard satellite communications system, took off from Savannah, Georgia, flew 300 miles west of San Francisco over the Pacific Ocean and headed back to Savannah. The route covered 4,808 nm.

Gulfstream flew the fifth of five test G500s—a production aircraft being used for cabin evaluation—on the mission. Phebe Novakovic, chairman and CEO of Gulfstream parent General Dynamics, told analysts during the company’s first-quarter earnings call today that Gulfstream expects to wrap up certification flight tests for the G500 in October, with certification and initial deliveries still anticipated by year-end. The G500 is designed to fly 5,000 nm at Mach 0.85 or 3,800 nm at Mach 0.90.

Once the aircraft is certified, Novakovic expects the ramp-up of the G500 to happen more quickly than that of the G650, saying the aircraft will be more mature by the time it reaches market.

As for the longer-range G600, Novakovic said the third aircraft is expected to join the flight-test program today. The certification timeline for the G600 is expected to follow about a year behind the G500‘s. The initial two G600s have logged more than 40 flights and 200 hours thus far. The G600, which will have a 6,200-nm range at Mach 0.85, first flew late last year.