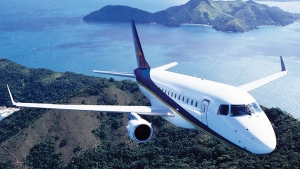 Embraer first entered the business aviation market with the executive version of its Embraer 135 commercial airliner called the Legacy 600.

Embraer’s decision to enter the business aviation market came at a time when revenues and backlogs at business aircraft makers were at an all time high. In the years following the delivery of the first Legacy 600 the market continued to expand, and Embraer took the decision to create two new business jets completely from scratch.

The Phenom 100 and the Phenom 300 were both introduced at the same time in 2005. The smaller of the two, the Phenom 100 was pitched in the very light jet category that at the time was beginning to be talked about as the next big thing.

The larger, the Phenom 300, is a light jet that seats six people comfortably.

Embraer’s real advantage with both aircraft is that they were able to bring the lessons learnt from building commuter aircraft. Both the Phenom 100 and Phenom 300 are both built to withstand multiple daily take offs and landings, which makes them ideal for use in charter operations.

The Phenom 300 in particular found favour with all of the major fractional operators. NetJets operate a large fleet of the aircraft both in the US and Europe, and Flight Options also has a sizeable fleet.

Despite the first aircraft being delivered in 2009, the Phenom 300 is still selling in large numbers, thanks in no small part to the incremental upgrades that have been introduced. For the last few years in the row, the aircraft has seen the highest number of deliveries in the light jet category, and it is likely that 2017 will follow suit.

As the market began to grow, the need for larger aircraft came about. Although the Legacy 600 filled a hole in the large cabin, Embraer saw a gap between the 600 and the Phenom 300 that could be filled.

After a lengthy design process that started when its MSJ and MLJ concepts were first introduced during the 2007 NBAA convention, the company formally launched the Legacy 450 and Legacy 500 in tandem during April 2008.

Embraer ran into an issue fairly early on in building the two new aircraft that caused both to be delayed by over a year.

The snag was with the software that controlled the fly-by-wire technology, but was eventually resolved and the Legacy 500 flew for the first time in November 2014. Certification followed in 2014. The smaller Legacy 450 flew first in 2013, and was certificated in 2015.

As well as the Legacy 600 being developed from the ERJ series of regional jets, Embraer also produced an executive version of its E195 narrowbody airliner. Called the Lineage 1000, the first flight happened in 2007, and Embraer has delivered 21 aircraft to date. 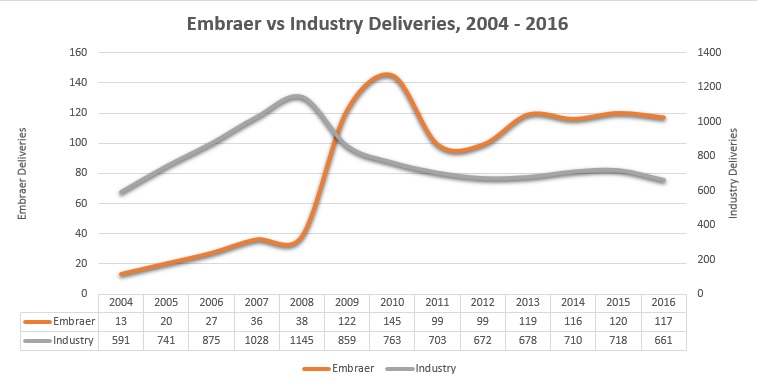 This was thanks to the initial delivery push of the Phenom 100 very light jet, the chart below shows how many of each of Embraer’s aircraft were delivered per year.

The chart above, again with data from GAMA, plots Embraer business jet deliveries between 2004 and the end of 2016. For ease of reading, the two aircraft with the highest number of deliveries, the Phenom 100 and Phenom 300 have been been plotted on a second axis.

Whilst it is hard to draw any real conclusions from the data, what it does perhaps show is that Embraer’s decision to introduce the Legacy 450 and Legacy 500 came at around the right time.

It also shows a decline in Legacy 600 / Legacy 650 deliveries, demonstrating where Embraer may be looking for its next model.

Although the current Legacy line is derived from a regional airliner, the company’s newest commercial airliners are all narrowbody aircraft. Whilst there can be no doubt that Embraer will make executive versions of these, they will compete in the executive airliner space, with only a small amount of sales up for grabs each year.

The executive airliner sector can be very lucrative for Embraer, especially as they often perform the cabin completions themselves, however the low volume of aircraft means that the company will have look in different categories for any new aircraft launches.

The space that the Legacy 650 competes in has been getting crowded, with manufacturers offering newer aircraft with upgraded specs. Traditionally the Legacy’s have competed with the Bombardier Challenger 600 series, the Falcon 2000 series, and, to a lesser degree, the Gulfstream 450.

The Challenger and Falcon lines have both seen incremental upgrades since they were launched. Both manufacturers are busy with different new aircraft programmes though, aircraft in different size categories, and have not, at least publicly, spoken about replacing those aircraft. Gulfstream of course will deliver the first of their new G500s later this year, although this isn’t likely to lose the Legacy any sales.

Earlier in 2017 Michael Amalfitano joined as the new head of the Executive Jets division. Amalfitano’s background is all in aircraft finance, having headed the Bank of America Leasing division, and senior managing director of business aviation finance at Stonebriar Commercial Finance immediately before joining Embraer.

Amalfitano’s first task was to define what Embraer brought to its customers. After spending time with all departments he decided that Embraer’s real proposition is value.

And this is certainly true of the Legacy 600 line. No other aircraft in its class offers the cabin size, low acquisition and hourly costs that the Legacy 650 offers.

Although Amalfitano is currently giving nothing away about Embraer’s future aircraft plans, there can be no doubt that his predecessor Marco Tullio Pelligrini had started the ball rolling.

It is also possible that the company are waiting on the development of new aircraft engines before committing to a new aircraft design.

Rolls-Royce are currently working on new engines, but it is likely that these are several years out. Snecma are also working on their Silvercrest engines, which has been holding back Dassault with its new Falcon 5X.

But the Silvercrest’s journey from concept to product may have deterred Embraer from choosing it. It will be worth the wait when it enters serial production, but until then it will be hard for aircraft manufacturers to forget the delays the engine caused to the Dassault Falcon 5X program.

Embraer will not want to put the decision to hold off on a new aircraft for too long. Although the main competition for the Legacy 650 is the Challenger and Falcon series aircraft, the manufacturers of both are currently tied up with larger new aircraft projects.

The company might be waiting to see if a new engine will come along to power any possible Legacy 650, but to steal the lead on any new competing aircraft launches, Embraer should be looking to launch a new aircraft within the next 12 months.