A delayed supplier has forced Gulfstream to backtrack on a promise to deliver the first G500 ahead of schedule by the end of this year, says parent company General Dynamics’ chief financial officer. 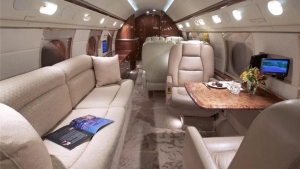 But the super-large cabin business jet will enter service in the “early part of 2018”, which aligns with Gulfstream’s original development schedule outlined in 2014, says General Dynamics senior vice-president and chief financial officer Jason Aiken, speaking on a third quarter earnings call on 25 October.

Aiken declined to identify the supplier or the component involved, but said the delay was a matter of misjudging the paperwork required by the supplier to comply with European Aviation Safety Agency (EASA) certification requirements. The G500 is the first Gulfstream aircraft that is seeking joint certification by the US Federal Aviation Administration and EASA at entry into service.

This is not any type of risk item to the programme,” Aiken says. “It’s strictly a matter of getting paperwork through that certification process.”

The aircraft will enter service as Gulfstream delivers the last G450 in January and begins to phase out G550 deliveries, Aiken says. The long-range G600 is on track to enter service a year later.

In mid-October, Gulfstream announced that the aircraft will be introduced with greater range than expected, allowing the aircraft to fly up to 4,400nm at Mach 0.90 and 5,200nm at M0.85.

The all-new Gulfstream G500 stretches the limits of high-speed travel. The advanced airframe design and powerful Pratt & Whitney Canada engines give the aircraft a range of 5,200 nautical miles/9,630 kilometers at Mach 0.85. The aircraft’s nonstop reach connects distant cities such as Istanbul to Cape Town, South Africa; Los Angeles to London; and San Francisco to Tokyo.

The aircraft outdistances all peers above Mach 0.85 and is the only jet in its class to combine incredible speed with significant range—4,400 nautical miles/8,149 kilometers—when flying at Mach 0.90. The G500 blazes across the sky at a maximum Mach of 0.925.

Payload isn’t sacrificed for speed and range. A fully fueled G500 covers 5,200 nautical miles/9,630 kilometers at Mach 0.85 with eight passengers and luggage. Double the payload and the G500 still flies up to 4,950 nautical miles/9,167 kilometers nonstop, enough to fly from Los Angeles to London.