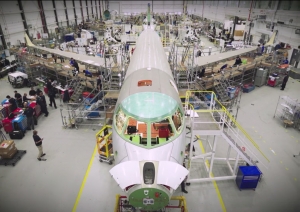 The fifth flight-test Global 7000, which is currently on the production line, has already been outfitted with the new lighter, and final, version of the wing for the ultra-long-range jet. (Photo: Bombardier)

Bombardier Business Aircraft is planning to incorporate a slightly lighter wing on its Global 7000, beginning with its fifth flight-test vehicle (FTV), but the company maintains that the certification program for what will become its top-of-the-line business jet remains on track for entry into service in late 2018. The company is not detailing the changes involved with the wing, but stresses that the only change involves the weight, not aerodynamics.

Previous issues involving the wing design contributed to the nearly two-year delay in the development program and led to the legal dispute between Bombardier and its wing supplier, Triumph Group, that was recently settled. Triumph disclosed earlier this year that it had filed a lawsuit seeking $340 million from Bombardier, citing costs and delays associated from “Bombardier-directed changes to the original wing requirements for the Global 7000 program.” Bombardier had responded the claims were “without merit” and said it would assert its own “major claims against Triumph.”

But at the same time, both companies stressed they continued to work collaboratively, and this culminated in a settlement announced last month that Triumph said “resets the commercial relationship” between the companies.

“Our aerospace structures business has been dedicated to supporting Bombardier on this critical program since entering into the contract and remains committed to the program’s continued success as the aircraft transitions from flight testing to entry into service,” Triumph president and CEO Daniel Crowley said of the settlement.

Bombardier had remained quiet about the issues related to the rework of the wing until earlier this year, when Alain Bellemare, Bombardier Aerospace president and CEO, confirmed that weight was a factor. He told analysts during the company’s quarterly results call in February that “it’s not a new wing…just a lighter wing…There’s not much change to that.”

Bellemare added that the design of the wing is largely completed. “We’re in the final phase here of making sure that the ‘lightweight wing’ as we call it is being finalized,” he said in February. Since then, both Crowley and Bellemare have been upbeat about the progress of the program, with Triumph having delivered not only the wing for FTV4, but the lightweight wing for FTV5, along with those for the first few production models.

Bombardier now has three test vehicles flying—the first took off Nov. 4, 2016, the second joined the program on March 4 and the third followed on May 10. The initial aircraft has expanded the flight envelope, brushing up against supersonic flight, reaching a speed of Mach 0.995.

The three flight-test vehicles in service “are meeting and exceeding performance and reliability expectations,” added a Bombardier spokesman. They are testing the flight envelope and basic handling, engines and avionics/electrical systems. In addition to continued certification testing, FTVs 4 and 5 are scheduled for interior testing. Bombardier is calling the fifth FTV the “masterpiece…that will complete entry-into-service validations.”

With the change in weight, though, one observer asked, “The questions that arise are many—primary among these is when will Bombardier be able to fly an FTV with the new wing, and how much flight testing from the earlier version will they be able to get ultimate credit for from the certification authorities?”

Bellemare maintained that 2018 remains the planned entry-into-service timeline, saying the company and suppliers were ramping up quickly on the wing and “we don’t see an issue on schedule.” A company spokesman added that the first three FTVs “will account for the majority of certification requirements as they successfully progress through envelope expansion.”

The company anticipates it will update milestones of the program later this summer. To keep pace with its planned entry-into-service timeline in late 2018, the company has been investing in production hardware for the initial deliveries, Bellemare told analysts.