Cessna has stopped making the Citation Mustang that defined a once-booming market for entry-level light jets when the Textron Aviation subsidiary launched the programme 15 years ago. 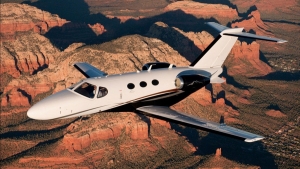 The last Mustang rolled off the assembly line and is set for delivery to a customer in the next several weeks, Cessna announced on 11 May.

“We remain dedicated to developing new products and providing solutions that matter to our customers,” says Rob Scholl, senior vice-president of Sales and Marketing for Textron Aviation.

Cessna launched the Mustang as the industry’s first entry-level light jet in 2002, offering the five-seater with a pair of Pratt & Whitney Canada PW615F turbofan engines.

It achieved first flight in 2005 and began delivering to customers a year later.

The Mustang survived the dramatic market bust that erupted during the global financial crisis in 2008, outlasting the original version of the Eclipse 500 and several other concepts in the light-jet category.

But demand for the smallest jet in Cessna’s portfolio dwindled over the least three years. Cessna delivered only 26 jets from 2013-2016, far below the peak of 125 deliveries set in 2009.

In total, Cessna delivered 472 Mustangs from 2006 to 2016, more than any other single product line over that period.

“The Mustang proved to be an incredible success for our company and our customers,” Scholl says, “and we’re thrilled to celebrate the ingenuity and pride that went in to creating the world’s most popular entry-level light jet.”