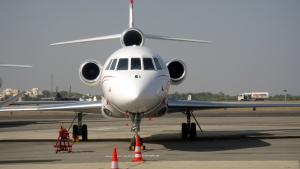 Dassault has delivered the 2,500th Falcon business jet. The aircraft was a Falcon 900LX that was delivered to a long time Falcon client based in the US.

Dassault reached the 2,500th delivery two years after celebrating the 50th anniversary of the first Falcon 20 delivery in 1965.

Originally called the Dassault-Breguet Mystère 20, the aircraft was renamed for the US market as the Fan Jet Falcon, but eventually shortened to the just the Falcon 20.

Dassault delivered 508 Falcon 20s until the end of production in 1988. Major customers included the US Coast Guard, and US express delivery firm FedEx, who used the aircraft from its Memphis hub to smaller cities that couldn’t support the larger aircraft its fleet.

Six years after the First Falcon 20 delivery, Dassault introduced the smaller Falcon 10. Unlike the Falcon 20, the Falcon 10 had a non-circular fuselage, and could carry up to four passengers. A total of 226 Falcon 10s were delivered until production was completed a year after the Falcon 20 in 1989.

Whilst both the Falcon 10 and Falcon 20 were twin jets, the first of Dassault’s now iconic tri-jets was introduced in 1976. Using the cross section of the Falcon 20 as the basis, the Falcon 50 could carry up to nine passengers.

But despite the prototype flying for around 60 hours, and receiving orders, both projects were cancelled with only a single Falcon 30 ever being built. The cancellation was largely due to a developing oil crisis, but the French government at the time had also asked Dassault to cooperate with Aerospatiale on building the fuselages.

Although the Falcon 10 and Falcon 20 saw incremental updates, it wasn’t until the early eighties that Dassault launched their next aircraft.

The Falcon 900 is a tri-jet that is still in production today. Dassault managed to use a slightly modified version of the Falcon 50 for the Falcon 900, and coupled this with a longer and wider fuselage.

The aircraft flew for the first time in 1984 and has so far seen over 500 deliveries. The current in production version is the Falcon 900LX was introduced in 2008, but has been modernised since then with a new interior.

After another 10 year gap Dassault introduced the Falcon 2000 in 1993. Using the conventional twin-engine design of other business jets, the Falcon 2000 was the first aircraft that Dassault designed entirely by computer, and without using models.

Like other Dassault models the original model has been upgraded several times. Unlike others though, there are currently two Falcon 2000 variants still available.

With two models still in production, the Falcon 2000 family has racked up over 550 deliveries so far.

With each of the new models and upgrades of existing models Dassault introduced new technologies. The biggest new introduction of new technology would come with the Falcon 7X though, which became the first business jet to use fly-by-wire technology.

Another tri-jet, the Falcon 7X was, until recently, the largest and most capable to date. Entering service in 2007, the Falcon 7X has a maximum range just shy of 6,000nm, and a maximum passenger load of 17 people.

So far Dassault has delivered over 270 Falcon 7Xs, with the aircraft still be produced in Bordeaux.

Although the Falcon 7X is now 10 years old, Dassault hasn’t yet released any incremental upgrades to the Falcon 7X.

Instead, they developed the Falcon 8X. Known internally in Dassault as the Falcon 7X-M1000, the Falcon 8X is a one meter stretch of the Falcon 7X fuselage with strengthened wings. In modifying the wings Dassault was able to increase the amount of fuel that the aircraft could hold, which gives the Falcon 8X an addition 450nm range over the smaller Falcon 7X.

Just like the Falcon 7X, the Falcon 8X is certificated to use London City Airport with its steep approach. It is the largest business jet currently able to use the airport.

The Falcon 8X flew for the first time in early 2015, and the first aircraft was delivered in October 2016.

Before the Falcon 8X was announced Dassault finally lifted the sheets off one of the most anticipated new aircraft of recent years.

Announced at the 2013 National Business Aviation Administration’s annual convention, the Falcon 5X is the first product from Dassault’s Super Mid Size (SMS) project. Although speculation (and the SMS name) suggested that Dassault were working on a super-midsize aircraft, the Falcon 5X is a large-cabin twin-engine business jet that can carry 16 passengers up to 5,200nm.

Whilst the Falcon 5X will be an incredible capable aircraft, it will always be remembered for the delays in the program caused by the Snecma Silvercrest engines not being ready. The first Falcon 5X was rolled out in the summer of 2015, and the first flight was originally scheduled to take place shortly afterwards.

Unfortunately before that could take place Snecma found an issue with the engines, causing a three year delay to the Falcon 5X.

All Falcon aircraft are beautifully engineered. Some may argue that they are over engineered. Each new aircraft brings new cutting edge technology and innovation into focus. The company also has a loyal customer base that has grown up along with the evolutions of the product line.