Dassault has formally begun the process of cancelling its new Falcon 5X business jet, due to ongoing issues with its Safran engines. 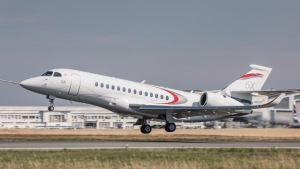 Cancelling a business jet programme is never an easy decision to make, especially if the first aircraft has been built. And had its first flight.

Bombardier faced this several years ago when it cancelled the LearJet 85. And earlier last week, Dassault cancelled its Falcon 5X.

The Falcon 5X was to be a twin-engine business jet capable of flying up to 5,200nm, developed at an estimated cost of around $1.3 billion.

The reasons for both aircraft cancellations are very different. Bombardier says that the LearJet 85 was cancelled due to weak market conditions. Dassault cancelled the Falcon 5X because of well publicised delays with the Silvercrest engines.

Dassault took a huge gamble when it chose the Silvercrest. Although Cessna had chosen the engines for the Citation Longitude, it took the aircraft back to the drawing board and swapped out the engines for a pair of Honeywell HTF7700s. So the Falcon 5X would have been the first time the engine had been used.

The first issues arose around the time of the Falcon 5X’s rollout in June 2015. Although the delay was announced later, the aircraft that was rolled out had preliminary versions of the engines installed.

Dassault had hoped to fly the aircraft shortly after the rollout. But with the initial delay this slipped back by two years, causing the company to postpone building more 5Xs.

Further issues were announced, although the aircraft did finally fly for the first time this summer.

The latest delay, announced during last month’s NBAA, seems to have been the final straw for Dassault, which said on Tuesday that it would cancel the whole Falcon 5X programme.

It did not say how many orders for the Falcon 5X it had, but had said in its 2016 annual report that 12 orders had already been cancelled.

Cessna, which chose the Silvercrest engines to power its upcoming Citation Hemisphere, says it won’t be significantly impacted by a fresh delay.

Dassault’s decision to choose the Silvercrest in the first place was a gamble – despite Safran’s experience building commercial aircraft engines. Unfortunately, that gamble did not pay off.

It will now go back to the drawing board to work on a new aircraft powered by Pratt & Whitney engines, which should be ready in 2022.