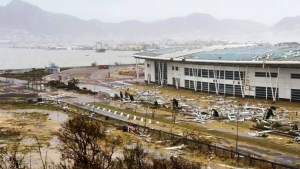 In the aftermath of a direct hit by Hurricane Irma on Wednesday, Signature Flight Support is reporting significant damage to the general aviation terminal at St. Maarten’s Princess Juliana International Airport, which it shares with another FBO. According to a company spokesman, communication with the location is limited to satellite phone, and as of Thursday evening it was still trying to account for all of its employees. With photos showing widespread destruction at the airport, Signature has no timeframe for its reopening there.

For the BBA Aviation subsidiary’s FBO at Puerto Rico’s Isla Grande Airport, the story was much brighter as the monster storm’s path veered northward and spared the island from its most intense fury, causing little if any damage to the facility. Jet Aviation reports a similar situation with its location at San Juan Luis Muñoz Marín International Airport. Antigua’s V.C. Bird International Airport was open on Friday morning as well.

While other islands suffered varying amounts of damage, Bohlke International Airways, the lone FBO at St. Croix’s Henry E. Rohlson Airport, escaped virtually unscathed and is currently being used as a staging hub for relief efforts throughout the Caribbean. Other affected areas include St. Thomas and Tortola. Signature noted its affiliated facility at Turks and Caicos closed on Friday ahead of the storm’s arrivals. The airports at St. Kitts and Nevis are expected to reopen by Saturday. Signature, like most of the FBO chains has added a hurricane information page to its website, alerting customers to the latest operating conditions of its locations in Florida and up the East Coast.