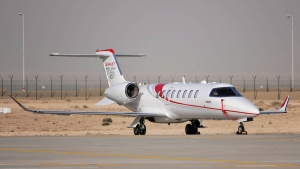 Bombardier’s ceremonial handover of a Learjet 75 to Leggett & Platt on Friday commemorated two major milestones: the 3,000th Learjet manufactured and the 100th Learjet 75 delivery. The milestone comes more than 50 years after Bill Lear helped pioneer the business aviation industry with the introduction of the Lear Jet 23, which it claims as the first purpose-built business jet to enter production. The nascent Lear Jet company, which had established a home in Wichita, handed over the first Model 23 to Chemical and Industrial Corporation of Cincinnati, Ohio, in 1964, about a year after first flight, according to the U.S. Centennial of Flight Commission. Originally known as Lear Jet (two words), the company built a little more than 100 of the $540,000 model 23s before moving to the 24 in 1966, followed by a succession of later models. Along the way, its corporate brand changed to one word, Learjet.

Bombardier bought the storied manufacturer in 1990 and in 1997 introduced the Learjet 75 predecessor, the Learjet 45. The 75, with its Mach 0.81 speed and 2,000-nm range, offered a number of enhancements over its predecessor, including new canted winglets and other aerodynamic improvements; and the Garmin G5000touchscreen-controlled avionics suite, the first implementation of this system in a Part 25 jet. The first of the 75s was delivered in late 2013.

Leggett & Platt, the recipient of the 100th Learjet 75, is a repeat customer for Bombardier; this 75 is its second. Founded in 1883, the company also is a pioneer, but in sleep technology. Leggett & Platt introduced its first bedspring nearly 125 years ago and now is a diversified manufacturer of products found in homes, automobiles and offices. It operates out of 130 facilities in 19 countries.

“The Learjet 75 offers an indispensable productivity tool to help us keep pace with the complexity and cadence of our operations,” said Jeffrey Presslor, director of aviation for Leggett & Platt, of the company’s new airplane.

Along with Presslor, other Leggett & Platt executives, Bombardier officials, Kansas Governor Sam Brownback, Rep. Ron Estes (R-Kan.) and local Wichita and Sedgwick county officials were on hand for the celebration.

“This is an impressive milestone that required the contributions of generations of Learjet workers and reflects the resilience of a location that not only manufactures Learjet aircraft, but also performs flight testing for new aircraft as well as aftermarket services for aircraft post-delivery,” Brownback said.