Passenger wait times at DXB drops thanks to new technology

Passenger wait times at DXB drops thanks to new technology

Passenger wait times at Dubai International (DXB) has dropped by as much as ten per cent during the first quarter of 2017 thanks to the implementation of new technologies at the world’s busiest airport for international passenger traffic. 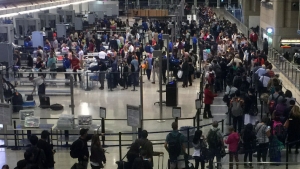 The first technology driving down transaction times and queues at immigration check points is Smart Gates. Smart Gates, and specifically a new service that enables the use of Emirates ID cards to pass through automated immigration gates at DXB, has pushed down transaction times to an average of 10 to 15 seconds per passenger. Since its introduction last year over 1.3 million UAE users have taken advantage of the service.

Completely free of charge and requiring no pre-registration, the service is available on some 120 Smart Gates across DXB and makes passing through immigration fast and convenient for all UAE residents. Launched last year by GDRFA (General Directorate of Residency and Foreigner Affairs), Emirates Identity Authority and Dubai Airports, the system can quickly, accurately and efficiently confirm the identity, travel plans and eligibility of UAE residents to enter and depart the country.

The second technology behind shorter wait times is a sophisticated motion sensor system that allows the airport to track queues in real time. The system consists of a series of 530 sensors that have been installed at crucial passenger processing areas in Terminal 1 and Terminal 3 at DXB. The sensors track the movement of people, collecting and computing valuable data like passenger wait times and queue lengths, and based on those factors, calculating the prevailing level of service. The data is conveyed via a simple mobile application in use by more than 5,000 operational staff across Dubai Airports, airlines, and control authorities working at the airport. The mobile application alerts all teams in real time and allows Dubai Airports operational staff to quickly identify bottlenecks and facilitate the deployment of resources to address them. Terminal 2 implementation is slated to take place during 2017.

“This automated system provides us with timelier and more accurate data more quickly than the manual system that was used previously,” said Frank McCrorie, Dubai Airports’ Senior Vice President of Operations at DXB. “As a result, the operations team and other organisations that work across the airport now have a bird’s eye view of bottlenecks, allowing them to better manage staffing levels and lanes, and improve the overall customer experience. We have more work to do in this area, but we are pleased with progress to date.”