Previous Next
Standard PC-24 at EBACE17 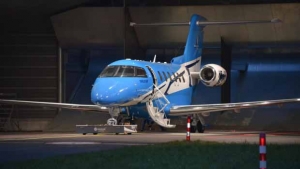 The third Pilatus PC-24 prototype – P03, representing the series standard – is being unveiled to the general public at this week’s European Business Aviation Exhibition (EBACE) in Geneva, Switzerland.

Three PC-24 prototypes have accumulated a total of 950 flights and 1525 hours in the air to date. Further certification flights are currently in progress. Series production is underway at Pilatus headquarters and is even accelerating to ensure on-time delivery after certification, expected by Q4-2017.

“I’m delighted that we can now unveil the first series-conform PC-24 to the general public at EBACE,” says Pilatus Chairman Oscar J. Schwenk. “We are confident of being able to convince even more potential customers of the uniquely outstanding performance of our Made-in-Switzerland Business Jet!”

Outfitted with the executive Zermatt interior, the so-called super versatile jet while be on the static display of Geneva International. There will also be a mock-up at the company’s booth in the Palexpo halls with the Vail interior, shown for the first time in the flexible six plus two seating configuration.

During the 2014 edition of EBACE, Pilatus sold 84 PC-24s in the space of just 36 hours. The order book is currently closed, but is due to re-open in 2018 after receipt of the first positive reports from PC-24 operators. Final PC-24 performance data will be published after certification.